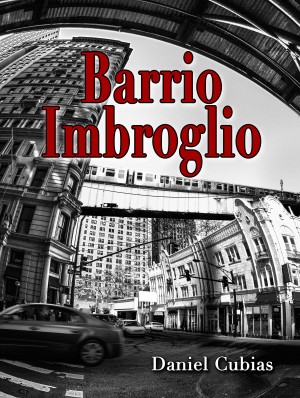 By Daniel Cubias
Abraxas Hernandez never wanted to be a detective. But when his cousin is murdered, Abraxas is dragged into a frenzied investigation that takes him from the mean barrio streets to the corridors of power in City Hall to a tequila-fueled pool party that turns deadly. He will dodge bullets (more than once) and face off with crazies both helpful and harmful — until at last he confronts the killer. More
Abraxas Hernandez is a young, second-generation Latino who lives in East Phister, a Midwestern city that is home to “a vast amalgamation of freaks, nutjobs, and social deviants.”

Abraxas’ cousin, Hugo, is murdered. Hugo’s girlfriend, Delta, found the body in the restaurant that Hugo owned. The restaurant was closed for the evening, and there are no obvious suspects or motives for Hugo’s murder. At the murder site, Abraxas meets Al-Janabi, a homicide detective who is “three layers of hardcore over a napalm center.”

Abraxas’ confidante, an ex-girlfriend named Vic, prods Abraxas to investigate the murder. Vic says Abraxas still has connections to the old neighborhood and can get info that the cops can’t. Vic, a woman who “thinks vodka is a chaser,” adds that she wants some excitement in her life.

Daniel Cubias has been a professional writer/editor for more than a decade, specializing in Hispanic culture. His articles for the Huffington Post and Being Latino magazine have provoked thousands of reader comments over the years. Furthermore, he is the creator of the website the Hispanic Fanatic. His fiction has been published in numerous literary journals and won several awards. In addition, he has ghostwritten a book for a Hollywood costume designer, worked on the desk of the Hollywood Reporter, and edited over 100 books.

You have subscribed to alerts for Daniel Cubias.

You have been added to Daniel Cubias's favorite list.

You can also sign-up to receive email notifications whenever Daniel Cubias releases a new book.