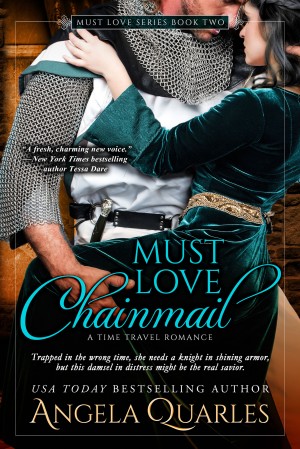 Trapped in the wrong time, she needs a knight in shining armor, but this damsel in distress might be the real savior. More
2016 RITA® Winner, Paranormal category.

Trapped in the wrong time, she needs a knight in shining armor, but this damsel in distress might be the real savior.

A damsel in distress...

With a day planner attached to her hip, the last thing Katy Tolson wants is a romance that threatens her well-ordered life. She's set to marry the safe--but bland--guy, but something's not quite...right. A careless wish thrusts her through time into medieval Wales and into the arms of...

A knight in somewhat shining armor...

Sir Robert Beucol, half-Norman and half-Welsh, lives with the shame of his father's treason and vows to reclaim his family's holdings and thereby his honor. To prove himself to his king, he must be more Norman than a full-blooded Norman. What better way to show loyalty than to fight his mother's people? He has no desire to be sidetracked by the mysterious wench with pink toenails, peculiar habits, and passion smoldering behind her cool, collected exterior.

A rebellion that challenges both...

The Welsh uprising fits perfectly into Robert’s plans. Katy’s on the other hand? That’s a no. As they embark on a perilous journey through the heart of Wales, each passionate encounter pulls them closer together, but farther from their goals. When everything they value is at stake, can they save each other and their love?

Angela is a geek girl romance writer. What makes her romances geeky? Whether it's fan girling over Ada Lovelace by having her as a secondary character in Must Love Breeches, or outright geek references with geek types in her romantic comedy with paranormal elements, Beer and Groping in Las Vegas, or going all Southern steampunk in Steam Me Up, Rawley, she likes to have fun with her romances and hopes her readers do too.

Angela works at an independent bookstore and lives in a historic house in the beautiful and quirky town of Mobile, AL. When she's not writing, she enjoys the usual stuff like gardening, reading, hanging out, eating, drinking, chasing squirrels out of the walls and creating the occasional knitted scarf. She's had a varied career, including website programming and directing a small local history museum, and has discovered that writing allows her to explore all her interests.

She's an admitted geek and is proud to be among the few but mighty Browncoats who watched Firefly the first night it aired. She was introduced to the wonderful world of science fiction by her father, by way of watching reruns of the original Star Trek in her tweens and later giving her a copy of Walter M. Miller Jr's A Canticle for Leibowitz as a teenager. She hasn't looked back since.

She has a B.A. in Anthropology and International Studies with a minor in German from Emory University, and a Masters in Heritage Preservation from Georgia State University. She was an exchange student to Finland in high school and studied abroad in Vienna one summer in college.

Also in Series: Must Love

You have subscribed to alerts for Angela Quarles.

You have been added to Angela Quarles's favorite list.

You can also sign-up to receive email notifications whenever Angela Quarles releases a new book.