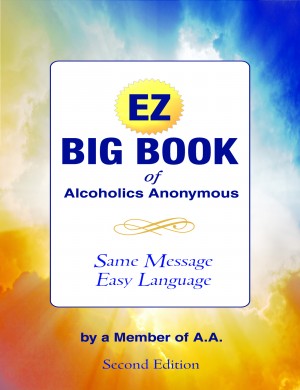 By Member of A.A.
The EZ Big Book of Alcoholics Anonymous: 2nd Edition is a paragraph-by-paragraph translation of the original AA Big Book published in the 1930s. The original text, written by program founder Bill Wilson, has been the AA Bible for for over 70 years.

The original 164-page text has never been updated. Wilson’s book is difficult for many readers to follow, as the narrative is heavy with big words More
The EZ Big Book of Alcoholics Anonymous: Second Edition is a paragraph-by-paragraph translation of the original AA Big Book published in the 1930s. The original text, written by program founder Bill Wilson, has been the AA Bible for for over 70 years.

The original 164-page text has never been updated. Wilson’s book is difficult for many readers to follow, as the narrative is heavy with big words and long sentences. Gender and lifestyle stereotypes abound: the book was written mainly for middle-class men with stay-at-home wives.

While faithful to the text published by Bill Wilson in 1939--line by line--the EZ Big Book is written in an easier, more journalistic style. Alcoholics at all reading levels can understand the message. Women will find the absence of sexist language more acceptable, and alcoholics with live-in partners and nontraditional lifestyles will not feel excluded. Couples are not assumed to consist of a middle class working males with nonworking wives. (The chapter “To the Wives of Alcoholics” has been retitled “To the Partners of Alcoholics”.) People whose spiritual paths are non-Christian will be comfortable with general references to a “Higher Power,” “Spirit of the Universe,” etc. The text is easy to read but never condescending.

The new EZ Big Book carries the AA message without loss of content. It may be used alone or as a study guide alongside the original Big Book. It’s a slightly edited version of the First Edition, which has sold thousands of copies around the world since its introduction in 2010.

The author is a retired science writer with many years of sobriety. She spent most of her working years as a functioning alcoholic, working during the day, drinking at night. This led her to drugs--which led her to emergency rooms and eventually to rehab. After her children and grandchildren said they couldn't deal with her substance abuse anymore, she reluctantly decided to retire from her writing career and sign into a treatment center in one stroke. On discharge 30 days later, she joined Alcoholics Anonymous (A.A.). That was over 15 years ago.

The EZ Big Book of Alcoholics Anonymous is the book the author wished she had when she first entered A.A.--a book without sexist language and one that didn't assume that alcoholics were men with stay-at-home wives. Her goal in writing the book--a project that took four years-- was to put the Big Book's life-saving message in the hands of more readers.

Need for a Revised Big Book
The author saw that many newcomers found the original Alcoholics Anonymous (Big Book) difficult to read. This guidebook to A.A.'s 12-step program was published by A.A. founders in 1939 and never updated. The pages reflect the lifestyles of early members of A.A.--mostly educated men with stay-at-home wives. The alcoholics attending A.A. meetings in the 2000s are quite different. Some are homeless or come straight from prisons. They have lost their families. Many are marginally literate. Women in the program are usually divorced or single, some struggling to raise children as single parents. At the same time, she heard women complain of how excluded they felt by the gender bias in the Big Book. The author believed that these alcoholics deserved a book they could read with ease--and even enjoy.

The author has published over one hundred books and articles under her name. She has taught numerous writing seminars to physicians and laboratory scientists at national meetings. She has also written about health and science for populations with limited reading skills. At one time, she specialized in the development of patient education materials for semi-literate readers. Her work was funded by medical institutions, government grants, and corporations. This professional experience inspired her to undertake writing the EZ Big Book of Alcoholics Anonymous. She was confident she could produce a more reader-friendly version of A.A.'s basic text.

During a four-year timeout in the early 1980s, she attended graduate school at the University of Florida and earned an Ed.S. degree in mental health counseling. Her intention was to work with women entering the workforce for the first time. She offered private counseling as well as group seminars, which focused on the challenges women face in a male-oriented culture. After a year in clinical practice, she decided to return to her first love, writing--where she could reach more people, still serving as a counselor but on the printed page.

Learn more about Member of A.A.

You have subscribed to alerts for Member of A.A..

You have been added to Member of A.A.'s favorite list.

You can also sign-up to receive email notifications whenever Member of A.A. releases a new book.