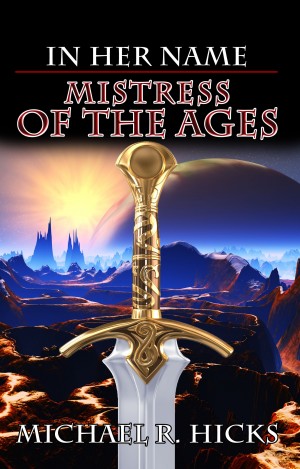 Mistress Of The Ages (In Her Name, Book 9)

By Michael R. Hicks
In the final volume of THE FIRST EMPRESS Trilogy, young Keel-Tath and her handful of followers must face the might of the Dark Queen and the ancient evil unleashed from Ka'i-Nur. But the pain and suffering she must endure pale against the unspeakable betrayal that awaits her, and that will change the fate of her people forever. More
In the third book of the In Her Name: The First Empress trilogy, the Kreelan warrior priesthoods, once charged with teaching and preserving the tenets of the Way, have sown the seeds of their own destruction by allying themselves with the Dark Queen and letting loose the ancient evil of Ka'i-Nur.

All that stands against the looming darkness is young Keel-Tath and a handful of surviving priests and priestesses of the Desh-Ka. Battered and bloodied from their own brief, vicious civil war, their honor and swords are now bound to the Child of Prophecy in a war that will determine the fate of their species forever.

If you’re new to the In Her Name series, here is the author’s recommended reading order:

Reviews of Mistress Of The Ages (In Her Name, Book 9) by Michael R. Hicks

You have subscribed to Smashwords Alerts new release notifications for Michael R. Hicks.