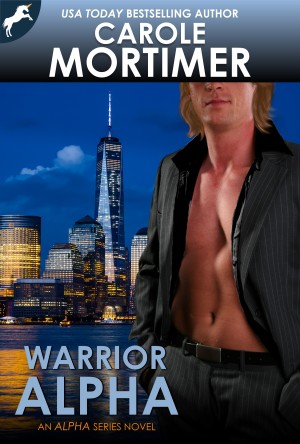 By Carole Mortimer
Nikolai Volkov barely survived his teenage years on the streets of Moscow. Twenty years later, he’s a hard and ruthless man, and as solitary as the wolf of his surname.
Except someone is hunting the wolf.
Daisy Redmond us sent to protect Nikolai, a man who makes it clear he doesn't like her.
But he wants her.
Daisy doesn't like Nikolai, either.
But she wants him. More
Warrior Alpha is the sixth, and full length novel in Carole Mortimer’s Hot romantic suspense series, Alpha.
Carole is 2015 Romance Writers of America Nora Roberts Lifetime Achievement Award Recipient, 2014 Romantic Times Pioneer of Romance, and a USA Today Bestselling author

Nikolai Volkov barely survived his teenage years living on the streets of Moscow. Twenty years later, and now living in London and head of security for the powerful Markovic family, he’s become a hard and ruthless man. And as solitary as the wolf of his surname.

Except someone is hunting the wolf.

Daisy Redmond has spent her entire life surrounded by warriors. She grew up with two older, protective brothers, and spent five years in the army with men equally as hard and driven. The men at Grayson Security, where she is now employed, are also ex-military.

Even so, Nikolai Volkov is more warrior than any other man Daisy has ever met. He’s also the coldest. And the man she is sent to protect, whether he likes it or not.

Nikolai makes it very clear that he doesn’t like it. Any more than he likes Daisy.

But he wants her.

Daisy isn’t sure she likes Nikolai either.

But she wants him.

Posing as Nikolai’s lover during a business trip to New York, can Daisy resist him long enough to be able to protect him from the men now hunting him?

And stop her heart from being broken when this lone wolf walks away?

Author’s Note: The stories in the ALPHA series have sexier situations and stronger language than my other books.

Coming November 1st, intro novella in Carole’s new Regency series, to be published alternate months to the Alpha series in 2016.