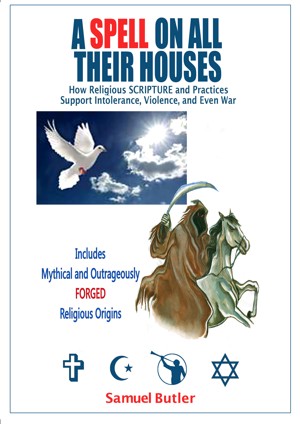 A Spell on All Their Houses, How Religious SCRIPTURE and Practices Support Intolerance, Violence and Even War. Includes Mythical and Outrageously FORGED Religious Origins

By Samuel Butler
How religious SCRIPTURE, practices and writings support cruelty, violence, hate, murder and sometimes questionable moral practices, such as sexual abuse against children. Many have even gone headfast to the extreme of war and genocide in the name of their preferred religion. Some religions in their origins copied previous myths and performed outrageous forgery. More
This book is about the consequences of religion more than whether Christ rose from the dead (Krishna, Mithras, Osiris, Attis of Phrygia, Dionysus, all of whom besides being born on December 25th from a virgin mother, died and were resurrected, except for Mithras - who ascended directly without dying!) or whether the text of the verses of the Qur’an correspond exactly to those revealed to Muhammad directly as the words of God, delivered to Muhammad through the angel Gabriel.. It is more focused on how religious scriptures and writings have been misused to harm, torture or kill others who don’t believe, or used for justification to do what most rational persons would consider evil. Christopher Hitchens puts it not so “mildly” as he claims he does when he says “Religion poisons everything”, and “Religion Kills” [2]. Included are some religious cover-ups such as the invention of Christianity, based upon numerous previous myths and outrageous forgeries accomplished around and after 325 A.D. for political purposes ordered by Emperor Constantine and accomplished by his friend Eusebius (Bishop of Caesarea in Palestine) who has been described as "the first thoroughly dishonest historian of antiquity". Destruction of previous conflicting documents and edifices followed, including the destruction of the Great Library of Alexandria.
Available ebook formats: epub mobi pdf rtf lrf pdb txt html
First 20% Sample: epub mobi (Kindle) lrf more Online Reader
pdb
Price: $2.99 USD
Buy Add to Library Give as a Gift
How gifting works
Create Widget
Tags: constantine religious violence bible forgery invention of christianity bible myths religious hatred moses a myth christ a myth mythra eusebius dishonest
About Samuel Butler

Reviews of A Spell on All Their Houses, How Religious SCRIPTURE and Practices Support Intolerance, Violence and Even War. Includes Mythical and Outrageously FORGED Religious Origins by Samuel Butler

Review
Elf32 reviewed on Aug. 13, 2011
(no rating)
A detailed book about the forgery in founding Christian religion out of the given religions in the Near East at that time. Also quite detailed about the Islam, how the Prophet married female children, was probably illiterate and Qur'an has also be forged out of a matriarchal religion.

Unfortunately the chapter about Buddhism does not go much beyond Wikipedia, and mainly focuses on the Feudalistic society in Tibet until 1950ies. Further examples in other, e.g. South-Asian, countries would be interesting too.

You have subscribed to Smashwords Alerts new release notifications for Samuel Butler.

You have been added to Samuel Butler's favorite list.

You can also sign-up to receive email notifications whenever Samuel Butler releases a new book.