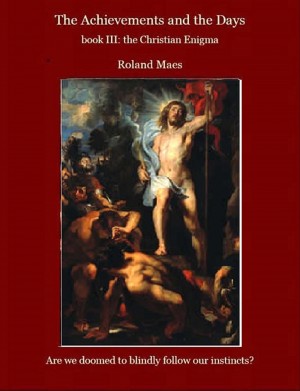 The Achievements and the Days Book III. The Christian Enigma

Roland Maes was born in 1935 in Belgium. After acquiring a degree in zoology at the Catholic University of Louvain (Belgium), he studied virology at the Max Planck Institute for Virus Research (Tübingen, Germany) and at the Wistar Institute of Anatomy (Philadelphia, USA). He worked during a year at St Jude Children’s Hospital in Memphis, always in virology and thereafter was during four years Research Officer for the Pan American Health Organization, stationed near Rio de Janeiro, where he worked on hoof and mouth disease and interferon. He moved thereafter shortly to Brussels (European Headquarters of Travenol) and then to Strasbourg, where he was active at the Richardson-Merrel Research institute. He resolved to create his own company in Strasbourg, working mainly on the development of diagnostic tools for tuberculosis and on alternative medicine. This occupation put him in close contact with developing countries of the Asian and African continent.
R. Maes is the author of numerous scientific publications.

You have subscribed to alerts for Roland Maes.

You have been added to Roland Maes's favorite list.

You can also sign-up to receive email notifications whenever Roland Maes releases a new book.