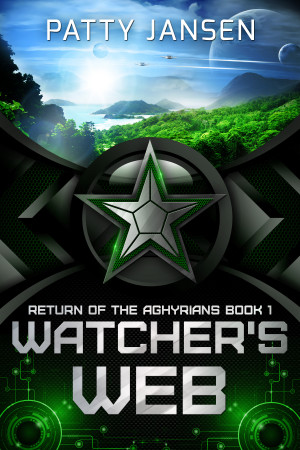 By Patty Jansen
Rated 4.50/5 based on 2 reviews
When Jessica ends up on a strange world, she knows it's not an accident, even though locals pretend it is. But two men are telling her different versions of what happened and why they want her, and with no knowledge of the world, she has to figure out who is right. More
She’s not your ordinary country girl, even though she might look like one. She casts webs of power, reading the feelings of living beings and telling them what to do. Nobody knows what causes it, least of all her. Her name is Jessica, but most people call her ‘freak’.
One fateful day, her ‘web’ connects with a stranger, and stray power causes the plane in which she’s travelling to crash in an alien world. An accident? The more she discovers about the world in which she has landed, the more she doubts it. She is a survivor from an ancient race that once travelled the stars. Her ancestors were powerful and dangerous, and it seems at least two people want her: the man who invades her mind, and the man who’s desperate to help her get back home. But Jessica grew up an Earth girl, and isn’t having any of this. She’ll pander to no one, thank you very much, even if her stubbornness enrages the tyrant race who hold the world in their grip.
Download: epub mobi (Kindle) pdf more Online Reader
rtf lrf pdb txt
Price: Free! USD
Add to Library
Create Widget
Tags: romance fantasy science fiction aliens planetary romance social sf female characters
About Patty Jansen

Also in Series: Return of the Aghyrians

This is a unique, interesting story. The characters are well drawn, and there actions, in context, make sense. I enjoyed reading about Jessica's growing maturity, and her interactions with the other characters in the story. The action sequences were compelling and well written. I am looking forward to reading the other three novels in this series; in fact, I've already purchased the omnibus set that includes all four books.

Jessica is returning home when her plane crashes and she is thrown into an alternate universe. She is rescued but is not sure who to trust. She had been communicating with a man through her mind but will not let others know for fear that they will think she is crazy. She has been able to read people’s minds and emotions growing up so she knew she was different. Now she must decide whether to reach out to this man in her mind or place her trust in another survivor of the plane crash in Patty Jansen’s, WATCHER’S WEB, book 1 of her RETURN OF THE AGHYRIANS series. Where is she? Who can she trust? Can she come back to earth?

Patty Jansen does a good job with her world building. We learn the rules and history on a need-to-know basis along with Jessica. She is 17-years old. She knows what it is like to be an outsider. She works to learn the customs and language but it is not easy. She feels she is responsible for the accident but has no one to help her through her guilt. She is around an alien people and cultural. When she once again meets the other survivor, Brian, she knows he is hiding something but she cannot figure out what it is. As Jessica learns who to trust and who not to trust, she has been in communication with a man, Daya. She has been able to connect with him through her mind. Now they will meet but Brian, also known as Iztho in this world, has sown seeds of mistrust so she does not know who to believe has her best interests at heart. It does not help that both men use sex as a way to control her.

As Jessica struggles to survive in this world and make it back to her own world she learns to control the special gift she has. She also learns that she has a history that may connect her to the people in this world. Jessica has to decide if she wants to stay or go.

I could not tell if the story was it supposed to be for YA or adults. Sometimes it was more YA and other times it was adult. I would say this story is for 16 and up.

I like the characters. The story kept me interested so that I want to know what Jessica’s future holds. Does she stay or does she go? At times the pacing of the story was slow, especially at the beginning. By the end there is a lot of action and adventure that kept me involved and wanting more. There are questions I want answered so I will be reading book 2 to find out what happens.

(reviewed 10 days after purchase)
J.C Hart reviewed on June 11, 2011
(no rating)
The first thing that I noticed about this book, and really appreciated, was the strong Australian voice of the character. It’s been awhile since I have read anything that is set, even just initially, in a country other than America or an American copy. So it was refreshing, and enjoyable to see an Australian author making the most of their country of origin.

Jessica very quickly gets uprooted, and the reader gets to experience a whole new world through her eyes. She is thrown into the middle of things she struggles to understand and Jansen does a stellar job of getting the reader caught up in this.

I have to say that this is the first book I’ve read in awhile that has aliens who actually seem alien. Sci-fi in general is peppered with species and races which are all too human – and I can understand that, on some levels. Writers want to make sure that the readers can relate to the characters in their book – but aliens should be different to us. Jessica gets to explore this, to learn more about these alien creatures, and herself in the process. Jansen has done a fantastic job of creating a world that is alien, and yet still approachable for the reader.

The story line is evenly paced and while we try, along with Jessica, to grasp at all the strands, Jansen brings it all together with verve. Jessica manages to stay true to herself, while also letting the barriers slide so that she can interact with those around her. There is a lot of action, and excitement, and I loved watching the development of Jessica throughout, as she begins to open up to others and connect with the world around her, which also means she gets to grips with her strange talent and mysterious history.

If I had one gripe, it would be with the way the romantic subplots were tied up. Where Jessica felt like a strong character who always followed her own mind in the rest of the novel, she seemed less in charge when it came to love, and the resolution felt more like her accepting the hand that life had dealt her, rather than a choice about what she really wanted. That said, it was clear throughout the novel that Jessica was something of a novice when it came to relationships of any kind, so perhaps her actions are fitting.

All in all, I really enjoyed this novel. It was refreshing and vibrant. I love the cultures and characters that Jansen has created; it felt like there was a lot of depth to them, a richness which helped bring the story to life. I’d recommend this book to just about anyone, but in particular to writers who want a great example of how to create rich cultures/worlds, without drowning the reader in too much information. I’ll be checking out Patty’s next release, as I am sure that will be a good one too!