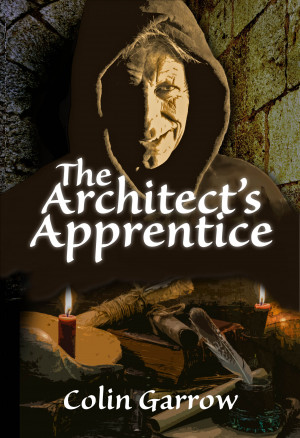 By Colin Garrow
Rated 5.00/5 based on 1 reviews
London, 1630. A boy searching for his father. A villain stealing books.

Forced to work for the dubious Savidge, eleven-year-old Tom Fennel is desperate to find his father. Distrustful of what he's heard, he's sure Savidge is involved. Meanwhile, books are vanishing from architect Martin Deacon's library - books from the future. More
London, 1630. A boy searching for his father. A villain stealing books.

Forced to work for the dubious Savidge, eleven-year-old Tom Fennel is desperate to find his father. Distrustful of what he's heard, he's sure Savidge is involved. Meanwhile, books are vanishing from architect Martin Deacon's library - books from the future. Enticed into the mysterious world of updrafts and secrets, Tom learns that finding his father is the least of his worries.

THE ARCHITECT'S APPRENTICE is book #1 in this epic time-slip adventure series.

If you love historical adventure mysteries, download your copy or buy the paperback version of The Architect's Apprentice now. Just scroll to the top of the page and select BUY to start your thrill-packed, time-travelling quest today!

Colin Garrow grew up in a former mining town in Northumberland. He has worked in a plethora of professions including: taxi driver, antiques dealer, drama facilitator, theatre director and fish processor, and has occasionally masqueraded as a pirate. All Colin's books are available as eBooks and most are also out in paperback, too. His short stories have appeared in several literary mags, including: SN Review, Flash Fiction Magazine, Word Bohemia, Every Day Fiction, The Grind, A3 Review, 1,000 Words, Inkapture and Scribble Magazine. He currently lives in a humble cottage in North East Scotland where he writes novels, stories, poems and the occasional song.

About the Series: The Maps of Time

London, 1630. When young Tom Fennel meets architect Martin Deacon, he embarks on an adventure that takes him through the streets of the city in ways he has never dreamed....

Also in Series: The Maps of Time

Young Tom has been forced to work for the unscrupulous Mr Savidge in London in 1630. He has been working hard to help support his mother and sister since his father disappeared in mysterious circumstances. Mr Savidge has Tom do many jobs for him, which sometimes includes Tom helping him to steal from houses late at night. On one such trip, Tom discovers a book that has the wrong printing date, it is a date in the future, so it must be a mistake, right? When the owner of the book, the architect Martin Deacon approaches Tom, explaining that the date is in fact correct, Tom’s life suddenly becomes much more complicated.

A complex time slip novel, The Architect’s Apprentice was engaging and intriguing. I tumbled into this fantasy adventure, with its historical London setting, working class English and description that had me wandering the crowded lanes, avoiding excrement and detritus whilst being intoxicated by the cloying odour of the Thames. It was on occassion, a little confusing, with many characters, but I felt satisfied that everything made sense in the end. There were also several surprises that I didn’t see coming!

Time travel stories are always complex due to the nature of moving through time and the possibility of changing the future or the past. This book is no exception. I love that the time breaks are in doorways, and that they exist all over London, yet few people realise it. I also liked that the characters traveled through time, yet never encountered other versions of themselves.

The children, Tom, Sarah and Emily were delightful characters, bright and inquisitive. Though they are of a station that requires them to work at such a young age to survive, they were neither down-trodden nor broken. I enjoyed seeing the way Tom and Sarah bonded with Emily through the story. Emily is rather precocious, yet it fits her superbly. Whilst the children were obviously good, it took a little longer to work out the roles of the adults. I was quite suspicious of Deacon when he first approached Tom, but as I got to know him better, I liked him. For the most part, the adults had a lot to hide, and I was often undecided as to which adult the children should trust, but that mysteriousness only added to the intrigue of the story.

While the book contains some violence, I think it would still be suitable for upper primary school students and high school students. I really enjoyed The Architect’s Apprentice, and I definitely want to read the next book in The Maps of Time series, Mortlake. There was a short preview of Mortlake at the back of the book, which served to strengthen my desire to read it.

*I received this book as a digital copy from the author, who asked me for an honest review of this book. I did not receive any other remuneration, and the review is composed entirely of my own opinions.

You have subscribed to alerts for Colin Garrow.

You have been added to Colin Garrow's favorite list.

You can also sign-up to receive email notifications whenever Colin Garrow releases a new book.