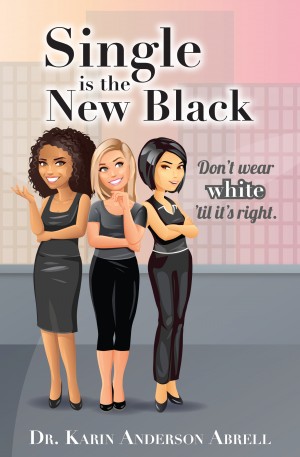 Single is the New Black: Don't Wear White 'til it's Right

By Dr. Karin Anderson Abrell
Single is the New Black: Don't Wear White 'Til It's Right challenges the lame clichés and bogus explanations singles repeatedly field regarding their love lives. Dr. Karin encourages us to resist the "you need to change to snag a man" protocol of typical self-help fare, remain true to yourself, and know you're fabulous "as-is" and when the right guy comes along, he'll know it too. More
Single is the New Black: Don't Wear White 'Til It's Right presents a new angle sorely needed in the Relationship genre--one that counteracts the messages single women typically field, such as "You're too picky!", "You're too needy!", or "You too intimidating, which is why you aren't married." Single is the New Black encourages women to stay true to themselves, as opposed to changing in efforts to attract a potential partner. It asserts that singles are smart, sexy, savvy "catches" who will eventually get "caught" so there's no need to settle for anything less than a stellar relationship. It reminds readers that flying solo provides lessons that will pay big dividends when they finally meet The One. Single is the new black-- so no matter what, don't wear white 'til it's right!

Born in Cincinnati, Ohio, Karin Anderson Abrell holds a master&#39;s degree in clinical psychology and a doctorate in developmental psychology. She spent the early portion of her career as a psychotherapist for children in Chicago&#39;s child welfare system and then stepped into academia for ten years. As a professor, she delivered a number of well-received presentations at national and international psychology conferences, covering issues such as identity development and family dynamics.

Dr. Karin first became interested in writing about dating and relationships when examining the complex emotions involved in her own engagement to be married. As she questioned her motivations for marriage, she pondered women’s roles and options in the post-feminism era. How much had really changed? After months of internal conflict, she called off her wedding two months before it was to occur.

Back “out there” in the dating scene, she became keenly aware of the messages directed toward single women—messages that appeared disparaging and illogical, yet hailed from reliable sources such as the local bookstore’s self-help section. Drawing on the data of other academic researchers and first-hand accounts of the many women she interviewed personally, Dr. Karin wrote Single Is the New Black in an effort to provide a logical counter-message of encouragement.

Practicing what she preaches, Karin waited for the right guy and didn’t meet him until age 40. Two years later they were married and it finally “happened” for her.

You have subscribed to alerts for Dr. Karin Anderson Abrell.

Would you like to favorite Dr. Karin Anderson Abrell?

You have been added to Dr. Karin Anderson Abrell's favorite list.