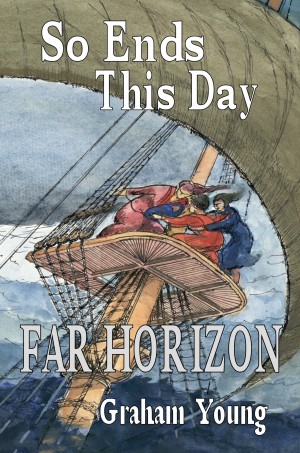 So Ends This Day: Far Horizon

After a continental education in the various capitals of Europe, Graham received a “Fine Arts” training in Paris. Here he gained a lifelong interest in the possibilities of film and education leading to a decade with camera and brush, recording tribal life and big game in Africa, while developing an educational program for third world countries using film pictorially as a multilingual medium. With a newly formed museum in America interested in his work, he joined a companion on his thirty-four foot yawl for a seven month crossing of the South and North Atlantic from South Africa to North America, always recording their voyage and experiences with camera and brush. Lecture tours followed on educational circuits, then an expedition on Arctic ice counting seal herds and collecting specimens, again covered with camera and brush. This was followed by filming the “Tall Ship North Sea Race” onboard the famous “Christian Radich”, then a voyage around the coasts of Norway in the square rigger “Staatsrad Lemkhul” winner of the race. While engaged on film production in the USA, his lifework collection of film, photos, and paintings in process for exhibition was totally destroyed by fire. Viewing this disaster as a salutary catharsis Graham turned to television joining the United Nations’ Department of Information, then helped pioneer England’s move from the BBC as a single provider of programs into the wider field of commercial TV. Continuing his interests in educational projects Graham now spends his time writing and painting between Canada and the USA.

You have subscribed to alerts for Graham Young.

You have been added to Graham Young's favorite list.

You can also sign-up to receive email notifications whenever Graham Young releases a new book.