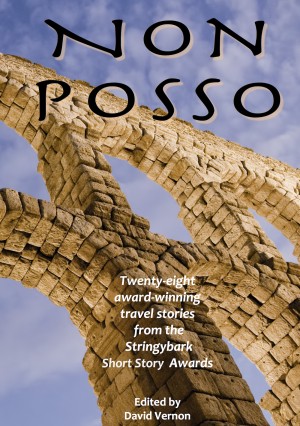  I’m scared. They’re children and I used to be a teacher, but I’m still scared. It’s impossible to tell how many there are. Why, oh why did I turn into this street? A moment ago it was empty. And then, suddenly one child, a little girl, bobs up in front of me. Tangled hair. Stick arms. Shapeless dress. She jabs her fingers towards her mouth. Fingernails rimmed with dirt.
— from "Children's Hands" by Helen Lyne

Before me lay, arranged in solid but unimaginative patterns, thousands upon thousands of skulls, all resting, placed by some unknown hand, on femurs, tibias and ulnas. To say that it was as silent as a tomb would be no exaggeration, for before me, behind me and to my sides, in every direction were millions of people. Well at least the remains of people. Each one, at one time, living, breathing, loving, playing, eating, working, dying.
— from "Ghosts? Pah!" by Michael Wilkinson

Labouring up the massive cinder cone of the active volcano on Vanuatu’s Tanna Island was a memorable event, not least because our young Melanesian guide wore nothing but a penis sheath and a smile. As we walked behind him, the women in the group gazed at his bare buttocks dusted with tight, peppercorn curls, grinning at each other and wiggling our eyebrows. We did occasionally look upward as Mt Yasur spewed out lava and boulders the size of small cars, but he managed to focus our attention on something other than the imminent danger of liquefaction or crushing. There are few health and safety regulations in the third world, although I suppose penis sheaths could be classified as Personal Protective Equipment.
— from "Close Encounter of the Fourth Kind" by Julie Davies

After reading 'Non Posso', I realised what tame holidays I have always chosen. The most daring thing I've ever done is unwittingly arouse a lonely male dugong off the coast of Vanuatu (the last story in this book, 'Close Encounter of the Fourth Kind').

Many of the other stories in this anthology of travellers' tales had me bamboozled why anyone would go to such places unless they had to, but most chose 'exotic' locations or modes of travel sure to be difficult. The sheer chaos of a holiday in Costa Rica, in 'The Beauty of a Detour' by Ann Kronwald, would have had me in paroxysms of distress, because I'm a planner, not a pantser. But apparently it was all worth it, because she describes their elusive destination beautifully: "This whole day had felt like a hurricane that left the house clean, the lawn mowed and dinner on the table."

Matthew Griffiths' 'How Not to Climb a Mountain' is a lesson in dogged foolhardiness that had me shaking my head, as it could have had a very different outcome. And 'Riders on the Storm' by Denise Kirklec demonstrated such tenacity and endurance I'm awestruck. Pippa Kay's terrifying Greek Island sailing experience in 'Meltemi' will forever change your view of those idyllic Mediterranean images that tempt us.

Some of the stories described places I am never likely to see in ways that could only delight another writer: 'The White Desert' by Alene Ivey about her trip to Egypt vividly described the road as "... a desert viper of bitumen snaking its way through a barren plain of unrelenting sand." I could see it, although the only desert I've ever travelled through was in the red centre of Australia.

Others described such alien cultures, like Peter Smallwood's 'Flying Into the Past' in the Papua New Guinea Highlands and Beverley Lello's 'Mist, Moss and Mountains' in the Himalayas, it's hard to believe they can still exist in our ever-shrinking world.

Mac Linardis' 'The Trap' was a wry study in interpersonal relationships that made me realise my family is pretty ordinary by comparison but, mercifully for all of us, also in another country.

'A Field of Their Own' by Karen Lee Thompson about her trip around rural Viet Nam deeply touched me, because my own brother did two tours of duty there as a bombardier in the New Zealand army. She describes the graves dotted all over Viet Nam, in the middle of rice paddies and on roadsides, casualties of that unnecessary war and the high death rates since. And it WAS unnecessary. We lost but the Commy dominoes didn't fall - we don't speak Chinese in Australia unless we plan to trade with them. Particularly poignant was Karen Lee's observation that, after all these years, there are still no birds in the countryside, despite significant revegetation after obliteration by bombs and Agent Orange. We can only speculate whether it's the residual effects of the deluge of herbicides we dropped on them or whether, in their continuing dire poverty, the locals eat any that have been able to breed there.

I adored Bradley Baker's observation in 'Ernesto's Beans' that, after visiting Hemingway's accommodation in Cuba, he understood why the author drank to excess. Equally, I loved Gerald Vinestock's single word finish of his prize-winning tale 'Non Posso', hating every moment of his time until he fell in love with a bella Italiana, choosing "Posso" ("I can"), rather than the negative title), which none-the-less spoke volumes.

These intensely personal stories reveal much more about the real value of travel than any travelogue or TV show ever could. So often, travel changes you - that is, if you're doing it right. As Graham D'Elboux wisely notes in 'The Redeemer': "If Rio has taught me anything, it's that you can't press the rewind button on life." But I'm still not convinced we need to be terrified or suffer to benefit from our travels. I think I'll stick to my usual cushy holidays. After all, we took three billion years to crawl out of the slime, so I have no intention of giving up inner-sprung mattresses and hot showers without a fight.