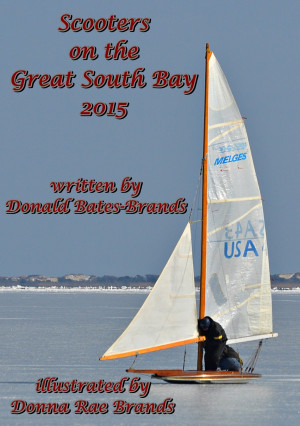 Scooters on the Great South Bay 2015

By Donald Bates-Brands
February of 2015 ranked as the third coldest recorded winter in the US. This presented the Great South Bay Scooter sailors of Long Island NY a rare treat. Scooters are antique ice boats that can sail over bad ice relatively easily. Originally a work boat, it has no rudder, steering with the jib. There were 14 Scooters on the ice this weekend. Whole families came down to enjoy the event. More
February of 2015 ranked as the third coldest recorded winter in the US. We haven’t had it this cold since 1979. A disaster for some, but for the Great South Bay Scooter Club in Bellport, NY and the Sayville Yacht Club in Blue Point, New York, it meant that this last weekend of February was a rare opportunity for a small group of Scooter sailors to enjoy their craft to the fullest. Scooters are a unique form of ice boat that can sail over really bad ice relatively easily. They can even go through a hole in the ice and climb out onto the ice on the other side.
In a bygone era, it was not unusual for the Great South Bay, which lies between Fire Island and Long Island, New York, to freeze over virtually completely. But it rarely does so today. This year huge areas of the Great South Bay were frozen over.
During the 1800’s shell fishing and hunting were major activities here and there was major traffic over the ice between Fire Island and "mainland" Long Island. This ice was treacherous to get across. Men couldn’t walk on it without risk of going through. Conventional boats used during the summer couldn’t navigate the ice. Most ice boats couldn’t handle the combination of unreliable ice and open water. To this set of conditions the Great South Bay Scooter was born. The Great South Bay Scooter was designed for these conditions as a work boat.
The origin of the Great South Bay Scooter is rather hard to pinpoint. It wasn’t designed; it evolved. Life for watermen on the Great South Bay was a hard one and they didn’t stop for winter. Their equipment and their catch had to be transported across the ice and different methods evolved to do it. These boats weren’t designed by naval architects, but built by trial and error by their owners. What worked stayed and what didn’t was dropped. It amounted to Darwin’s Natural Selection.
What they all have in common is being fairly beamy (wide) for their length with four runners that run for most of bottom of the hull. The entire boat has a very shallow aspect being as deep from keel to deck as a Sunfish or Laser. The deck is curved in a manner that usually comes close to the curve of the hull. There is no rudder. The jib is the primary means of steering, followed by shifting the weight of the riders. Trim of the main sail sometimes comes into play as well.
The beauty of the design is this boat can charge across many types of ice without getting into trouble or having anything to get caught. The Scooter can sail through pressure ridges, fly over a certain amount of rotten ice, and, with some finesse, go right off the ice, cover a stretch of open water and climb up on the next sheet of ice.
The Great South Bay Scooter Club began in 1904 and is located in Bellport, NY on Bellport Bay. Historically the best ice in the area occurs here, but not this year. Hurricane Sandy breached the Fire Island Barrier Beach altering conditions on the bay. It took a few days for people to realize that the good ice was further west in Patchogue Bay, but by Saturday morning over a dozen of these ancient craft descended on the Sayville Yacht Club to try their luck.
On this Saturday, February 28, people were out in force to enjoy the ice. Altogether there were 14 Scooters on the ice that weekend. One of these was built in 1903 and was almost completely original including the canvas sails. The newest ones were made of fiberglass with high performance full batten Dacron sails. The main event was the Scooters of course, but there were also other ice craft; a converted land sailor, a conventional modern ice boat, a skate sail and even a leaf blower. Whole families came down for the event and a good time was had by all.
Download: epub mobi (Kindle) pdf more Online Reader
rtf lrf pdb txt
Price: Free! USD
Add to Library
Create Widget
Tags: family ice racing weather ice boat winter 2015 work boat
About Donald Bates-Brands

Boats and the sea have been my life. I think I was about eight years old when I got my first boat, a dilapidated canoe. A few years later I graduated to a healthier canoe with a lateen sailing rig. This was my first sailboat. I capsized it a lot, but had thoroughly caught the boating bug. I started racing sailboats by the age of 12.
In 1968 I joined the Coast Guard at the age of 17 and was discharged in 1975 with the grade of First Class Quartermaster. My first tour in the Coast Guard was an oceanographic trip to Africa on the CGC Rockaway. It was a three month tour with most of the time at sea, but it was my first adventure out of the country and I loved it. My second oceanographic tour on this ship took me to the Barbados, Trinidad, the Bahamas, and Puerto Rico. Later in this hitch I was transferred to the CGC Lilac, a triple expansion steam buoy tender, a fugitive from museums built in the early Thirty’s. I believe it is now being refurbished in NY City for display in the near future. I returned to the CGC Rockaway to finish my first hitch and made a Cadet cruise to England.
Discharged from the Coast Guard on Oct 22, 1971, I returned to England for a 3 month tour by bicycle. In January of 1972 I rejoined the CG and reported aboard the buoy tender CGC Firebush at Governors Island NY. In the summer of 1972, I took leave from the CGC Firebush and enjoyed a two week cruise along the south coast of England with a British friend on his 27’ Trident class sloop. This was a bilge keel rig that proved to be fairly important in an area with 30 foot tides. Many times at low tide we were aground, but vertical resting on the two keels.
After returning stateside to the CGC Firebush, the wanderlust hit me again and I requested and received a transfer to the CGC Gallatin which was making a cadet cruise through Europe. On this trip I got to Gibraltar, Portugal, Germany, Denmark and England. In 1974 I bought the Chesapeake Skipjack "Pale Moon" and sailed it from Maryland's Eastern Shore to NY for Opsail '76. Throughout this period I was involved in one design racing.
Since my discharge from the Coast Guard in January of 1975, I have been working on large seagoing tugboats and currently hold a 1600 ton Ocean Master's License as well as Unlimited Third Mate and an Unlimited Radar Observer endorsement. I have written extensively on marine safety for Offshore Magazine and other publications. I have now retired from going to see and am pursuing my writing full time. On my free time, I enjoy cruising with my wife on our Catalina 22 on Long Island NY's Great South Bay.

You have subscribed to alerts for Donald Bates-Brands.

You have been added to Donald Bates-Brands's favorite list.

You can also sign-up to receive email notifications whenever Donald Bates-Brands releases a new book.