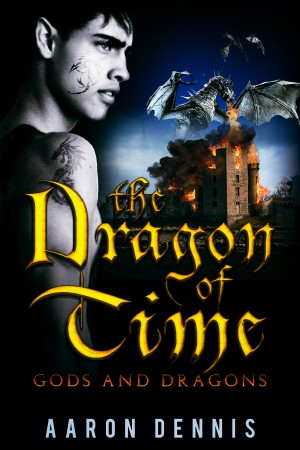 The Dragon of Time: Gods and Dragons

Rated 4.75/5 based on 4 reviews
Gods, Dragons, a mercenary with a blade and no memory of his past.... The world of Tiamhaal is alight in war. Men ruled by kings slay their opposition in the name of their God, but there are others who claim the Gods are little more than scorned Dragons of ages past. Scar has come to find the truth, but is the truth an absolute certainty, or is it just the skewed memory of a forgotten kingdom?

Price: $2.99
$1.20 USD
Buy with coupon Use the code AGB60 at checkout for 60% off during our site-wide promotion!
(Offer good through May 31, 2020 )
Have a better coupon?
Add to cart, then apply your coupon
Add to Library Give as a Gift
How gifting works
Create Widget
Tags: adventure fantasy gods epic dragons heroic fantasy high fantasy epic adventure
About Aaron Dennis

Gods and Dragons from Tall Tale Tv
Scar and the Zmajans take over a Kulshedran outpost. Scar wonders why his wounds heal so quickly.

Just a very great fantasy about dragons pretending to be gods. A must read.

Omg! I was not expecting this kind of story from The Dragon of Time, Gods and Dragons.

Yes, It’s an action-packed, fantasy adventure, and yes, there’s a ton of action right at the beginning, a ton, but it seems to me that it was used to portray how savage the Zmajans are compared to the rest of the people of Tiamhaal. Meow-kay…let me back up!

Scar is a mercenary. He is amnesiac, but can handle a blade better than anyone. He only wants to learn of his origins, and so Zoltek, king of the Zmajans—people who are in the worship of Zmaj, the All God, hires Scar to fight the Kulshedrans, people who worship the God of Truth, and in exchange, Zoltek is supposed to ask Zmaj about Scar, but…but…but…things are not simple.

Sigh, they never are, especially when big, burly, bald, muscley dudes are swingin’ swords at their enemies….

So, like, if you read the blurb, it hints at the fact that the Gods being worshipped might not be Gods, right? And it’s, like, called Gods and Dragons, so spoiler alert, most of the people in the world are unknowingly worshipping Dragons! They don’t even know it!

Here’s the deal, Scar doesn’t really care about whatever he needs to do, so long as he can learn of his origins, but after a betrayal, he actually switches sides, and he starts fighting for King Gilgamesh of Satrone, worshipper of Kulshedra, but this is before anyone figures out that some of the Gods are Dragons, and then things just get down right crazy-cat!

I won’t spoil the story because you have to read it. There’s a reason this fantasy “tail” of epic-cat proportions has mucho great reviews, and I guess it won some kind of contest, too, but listen to the reading in the description, and then get this book.

Scar is an awesome warrior. Think Wolverine meets the Matrix. The presmise of the story is that Dragons existed long ago. Then they were killed and then the Gods started talking to people, but for some reason, some people called Paladins think that the gods are actually the dragons from long ago. Scar thinks so too, but he doesn't really care because he's amnesiac and all he wants is to remember his life, so he gets hired on by this king called Zoltek to kill these enemies called Kulshedrans.
But I have to back up. The book clearly states that the gods worshiped are dragons, so you know it going in, but the people in the world don't know it even though they're named after the dragons, they think they're named after the gods, so Zmajans worship Zmaj and Kulshedran worship Kulshedra, but it doesnt end there. Each people is like its own species, they look different, they have the "blessing" of their dragon so Zmajans are dark skinned but they're all bald and they all have these colored lines over their skin like tattoos, and Kulshedrans are all bronze or copper. It's crazy.
Think elves and dwarves and orcs and just replace them all with different species of people with different magic. It's nuts.
Anyway, the point of the story is for Scar to regain his memory, but he ends up figuring out who he is in his dreams only when he wakes up, he can't remember, so you the reader, get to know who he is by like the fifth or sixth chapter, but he has no idea until much later. Still, he finds himself on this missions, after nearly getting killed by Zmajans who betrayed him, with a former enemy, a Kulshedran captain called Labolas, which I though came from Legolas, right? Turns out there's a demon in like Sumerian or something called Glasya Labolas, so I can't wait to see how that ties in.
Regardless, Scar and Labolas are trying to figure out who Scar is and King Gilgamesh says Scar is the heir to a long defeated Kingdom called ALduheim, so they go on a quest to reach Alduheim and a bunch of other races or tribes or whatever join up, but in Alduheim they all learn that the Gods they worship are Dragons, but I can't say much more than that without ruining the story.
In the end, I'm at a loss. I don't even know why this book is self published. It should be at every major bookstore. Everything about this book was on point. I know there's a sequel, so that's where I'm going next.

(reviewed the day of purchase)
Chris Solaas reviewed on Sep. 7, 2016

Scar is a complete mystery to everyone, including himself. He has no past that he can recall. He only knows that he woke up being attacked by a roving band of Dracs, hopelessly outnumbered, yet somehow managed to hack through all of them. His fighting prowess is amazing, and he has the ability to heal in moments anything but mortal wounds.

He finds himself a mercenary in the employ of Zoltek, leader of the Usaj, who has promised to request his god Zmaj reveal Scar's past, and restore his memory. Double-crossed by Zoltek and left for dead, Scar finds himself catapulted into an epic struggle for truth between Dragons posing as gods and the gods they are replacing.

Wielding his gargantuan two-handed sword with its odd diamond-shaped holes, he carves a path through everyone blocking him from uncovering the truth about his past, his future, and the gods and dragons the people serve.

Gods and Dragons is an obviously large epic fantasy series launch, on the scale of The Wheel of Time. The world building is amazing, and there are more people groups, religions, magical 'blessings' and countries than you could possibly remember. The action in places is gripping, and the characters, especially Scar and Labolas, are well-defined and real. Scar reminds me of Conan, but with more brain. His hack-and-slay mentality however, has him rushing into any confrontation, confident in his ability to mow down the opposition faster than Link can cut the grass.

Content:
Violence:
PG-13 - In several places people are cut through, decapitated, or cleaved in two. There is a torture scene that is described, though not in great detail. The level of graphic violence is not greater than you would find in LOTR, so I left this at PG-13.

Drug Content:
Drinking occurs to excess in a few places, and visits to inns with ale on tap is a sporadic occurrence. In one place a roller-derby queen woman challenges Scar to a drinking contest, if she wins she has him for the night.

Adult Content:
R - There is one sex scene in the book, it's not graphic but goes into enough detail to edge the rating. As mentioned above, there is other adult content, none of it to that level.

Christian content:
The main thrust of the book is a struggle to prove that the gods each people group are worshipping, the ones that are giving them their characteristic 'blessings', are actually dragons. The real gods, the ones the paladins serve, are trying to gain their people back and expose the truth about the dragons. There is no biblical truth, no Christian content. However, it does drive home that an undesired truth is better than a well-established lie, and that if you speak the truth, you will receive persecution. There are many devout in their faith, whether following gods or dragons, and some that convert after learning the truth.

Final analysis:
This is a solid offering as a pilot to an epic fantasy series, the world building was extraordinary, the characters believable, and the action gripping, when it was there. The biggest issue I had with it was pacing, as there were places where action, intrigue, and plot happened, and this reader couldn't put the book down. But they were separated by portions of slow action that could have been cut. I found myself paging forward to get to the good parts, sometimes, which isn't my usual thing. I do look forward to future offerings in this series, as it was worth reading, and hopefully the following novels will only improve. Four Stars.