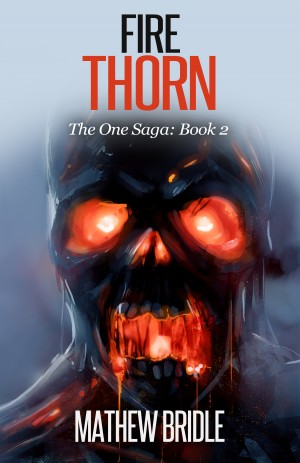 By Mathew Bridle
The struggle to control the lust of the flame deepens as Dekor attempts to unite the lost troll tribes. A dark power has risen in the depths of the Algid Range where the necromancers of Qtir first settled the southern lands. War is coming. The Great Prophecy spreads across the world unveiling its deeper secrets. Dark Blade calls for blood drawing the orcs of Azmabad into the spreading conflict.

A halo of soft golden light was falling beyond Shadow Hill.
That was all Mathew Bridle had when he sat down to write his first novel. Two and half weeks later The Rising, a 1980’s style slasher, was finished. Others would quickly follow in different Genres: 3 Phaze (sci-fi), Lagoon (sci-fi horror), A World Lies Bleeding (Sci-fi), King of King (Fantasy), Mark (incomplete sci-fi) until Emun of Mor (fantasy).

It was on a train journey from Manchester to London that Emun, a character originally from King of Kings, walked into Mathew’s thoughts and took up residence. It took a full year to put together the 155,000-word epic fantasy, but it was time well spent. Not because of eth quality of the work but rather the world that was formed. Emun of Mor was published by an indie press, Vamplit Publishing where it did nothing. It was hacked apart twice before it became Young Warlock in which time 5 years had passed, and his life-long love of fantasy had found a home.

Among his friends, Eric C. Williams a noted sci-fi author from the 1960s and ’70s helped to shape his writing with his depth of knowledge and story-crafting skills. Other writers too, from his local writing circle, helped to guide and structure his language and worlds. Without these valuable inputs, he would not have the skill he possesses today.

Writing has grown from a hobby to a passion, whether that is fantasy, history, screenplays or novels, so long as it is writing. He has a love of writing challenges, to be given a set of words and a random topic and 10 minutes to get started. He is a true believer that there is no such thing as writer’s block, after all, no one has talker’s block. So long as you have something to say then you have something to write; even if it is just jibber-jabber, isn’t that what the best blogs are made of?

Currently, he is working on the third instalment of The One Saga: Dark Mistress, Masterplayer – a historical spy story with Shakespeare and Queen Elizabeth, and Rain: a comic vampire noir tv series.

As Mathew likes to say, “As long as there are words, there is always something to write.”

About the Series: The One Saga

A world plunged into darkness stumbles oblivious to the greater plans of gods and men.

Also in Series: The One Saga

You have subscribed to alerts for Mathew Bridle.

You have been added to Mathew Bridle's favorite list.

You can also sign-up to receive email notifications whenever Mathew Bridle releases a new book.