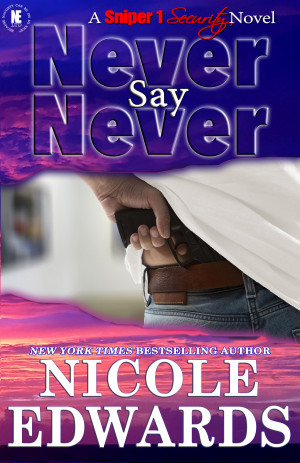 Can Ryan Trexler and Zachariah Tavoularis complete their mission, despite the fact that it puts them in a tenuous situation, bringing them closer than either of them ever expected? And will Z allow RT to convince him that they can never be together, no matter how much they both want it? More
Ryan Trexler has devoted his entire life to his family’s security business. And now that he’s slated to take over the reins for the company, RT knows that his life is only going to get more complicated. Add in the fact that he’s lusting over one of the men who works for him and RT knows that there are some serious tough times ahead.

Zachariah Tavoularis—nicknamed Z—has been employed by Sniper 1 Security for a decade. Despite being known as the most loyal enforcer outside of family, Z also has a reputation of being quite the playboy, though that was based more on rumor than fact. When an assignment comes up that forces the two of them to work together, Z knows it’s time to show RT he’s not the man he thinks he is.

Can they complete the mission, despite the fact that it puts them in a tenuous situation, bringing them closer than either of them ever expected? And will Z allow RT to convince him that they can never be together, no matter how much they both want it?
Available ebook formats: epub
Price: $4.99 USD
Buy Add to Library Give as a Gift
How gifting works
Create Widget
Tags: romantic suspense hea mm gay romance
About Nicole Edwards

Nicole is a New York Times and USA Today bestselling author who was born and raised in Texas. Married
with three kids and four dogs, she has plenty of interaction to keep her imagination brewing. Her books
have been featured in USA Today’s Happy Ever After segment as well as Indie Reader’s best seller list.
She has forged her way as an independent author.

Although she has a bachelor’s degree in Human Resources, she prefers to be hiding out in her writing
cave, talking to the fictional characters that have built up in her head over the years.

When she isn’t writing or plotting her next book (sometimes translated to “playing on Facebook”),
Nicole loves to read and spend time with her family and her dogs.

About the Series: Sniper 1 Security

The Kogans and the Trexlers are in the business of protecting those who need to be protected. And their motto is: Protect… by any means necessary.

You have subscribed to Smashwords Alerts new release notifications for Nicole Edwards.

You have been added to Nicole Edwards's favorite list.

You can also sign-up to receive email notifications whenever Nicole Edwards releases a new book.