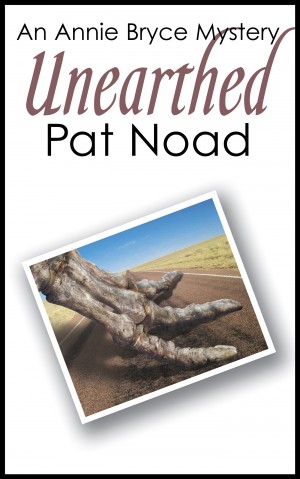 By Pat Noad
There’s no peace for Australian journalist Annie Bryce. When a seemingly harmless job suddenly has her mired in a maze of old crimes and new conundrums, she heads out of town to search for a missing girl, and to cover a story about Queensland's world-famous dinosaur excavations in the remote outback. Violence erupts when secrets buried deep in history are unearthed. A cracker of a read! More
Unearthed - Book Five.

She thinks it’s all behind her, that she and photographer Steve can start a serene new life together, now that her nemesis the manic killer Martin Barclay is dead. Wrong! It only takes two phone calls to shatter journalist Annie Bryce’s illusions.

She’s plagued by nightmares after a call from the English detective on the Barclay case. He desperately needs her help to find his daughter, who has gone missing in Australia. Annie's home country. When a minor research job suddenly turns toxic, Annie is mired in a maze of old crimes and new conundrums as she heads into Australia's outback with Inspector Harold Mason to follow a tenuous lead to his daughter – and get out of the way of danger, once again.

At the world famous dinosaur digs in western Queensland the quest for prehistoric fossils interweaves with the search for the girl, and for the shocking truth about that toxic research.

Violence erupts after secrets buried deep in history are finally unearthed. How far will Annie go to reclaim the serenity she craves?

This is the fifth and last of the Annie Bryce Mysteries.

Pat Noad is an Australian author who divides her time between big city life in Brisbane and getting sand between her toes on the nearby Sunshine Coast, where a lot of her writing happens.

Pat’s work as a consultant has taken her to all sorts of nooks and crannies of her vast and varied home state of Queensland. She finds herself intrigued by the old stories passing down the generations in this young country, a country which has matured into a sophisticated society so quickly since the First Fleet unloaded its convict passengers just over two hundred years ago – a country which generally looks to the future rather than back over its shoulder.

Her stories often find the blazing Australian sun casting dark shadows from the past across the present, and long-dead skeletons rattling in family cupboards.

Pat’s mystery writing sits at the lighter end of the crime fiction spectrum. She also enjoys writing about the ever-changing Australian society in which she lives, and reflecting on the changing nature of our world. She's written a series of five Annie Bryce mysteries along with two anthologies of short stories and essays. Her latest novel 'On the Edge' is her first venture away from crime fiction in novel form.

Reviews of Unearthed by Pat Noad

You have subscribed to alerts for Pat Noad.

You have been added to Pat Noad's favorite list.

You can also sign-up to receive email notifications whenever Pat Noad releases a new book.