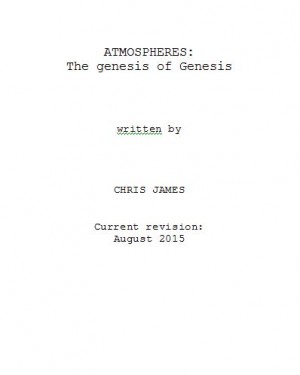 Atmospheres: The genesis of Genesis

By Chris James
Feature-film length screenplay.
Atmospheres is a biopic of Tony Stratton-Smith and early Genesis. It’s a comedy. It’s a drama. It tells a positive, life-affirming story of self-belief and redemption. And it is a tribute to a forgotten man without whom we may never have had the Genesis we know and love.
Download: pdf rtf Online Reader
Price: Free! USD
Add to Library
Create Widget
Tags: 1970s biopic 1970s bands genesis band progressive rock music tony strattonsmith
About Chris James

Chris James is the critically acclaimed author of Repulse: Europe at War 2062-2064, the history of a future war between NATO and the New Persian Caliphate. Chris has also published the ground-breaking science fiction novel Class Action, and in February 2017 will publish his next science fiction novel, called Junctures. He is also the author of Stories of Genesis, Vol. 1, Vol. 2 & Vol. 3, short story collections based on characters in songs by the rock band Genesis. In addition, Chris has also published a feature-film length screenplay called Atmospheres: The genesis of Genesis, a biopic of early Genesis and Tony Stratton-Smith.

Chris is an occasional lecturer in English at Warsaw University and a full-time language trainer to many. He lives in an agreeably anonymous – and nicely forested – suburb of Warsaw, Poland, with his Polish wife and three children.

Reviews of Atmospheres: The genesis of Genesis by Chris James

You have subscribed to alerts for Chris James.

You have been added to Chris James's favorite list.

You can also sign-up to receive email notifications whenever Chris James releases a new book.