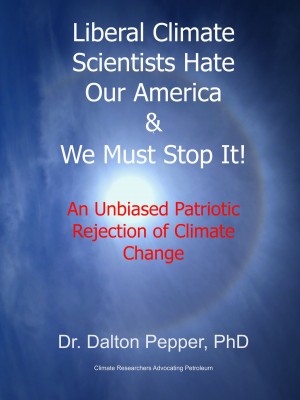 Liberal Climate Scientists Hate Our America & We Must Stop It! An Unbiased Patriotic Rejection of Climate Change

By Dalton Pepper
Rated 4.00/5 based on 1 reviews
America, the greatest nation that has ever existed, is under threat from the liberal scientific establishment, which insists on promoting a radical climate change agenda based on nothing but theories, computer models, and evidence. This book discusses the facts behind climate change and its clearly observable impacts, and explains why true Americans should ignore all of it and just invade Canada. More
In 2014, we were bombarded with apocalyptic news about so-called "climate change"—at least when the power wasn't out due to winter storms or drought-induced wildfires. The IPCC released its Fifth Assessment Report, and the United States government released its most comprehensive report ever on climate change. These reports provide further confirmation that scientists and government officials just won't shut up about climate change. The U.S. government report, in particular, has the audacity to devote valuable energy—which is badly needed for air conditioning—to make the case that climate change is a problem right now, not simply an issue for our children or grandchildren.

I don't want you to waste valuable time reading these reports—there are SUV's to be driven, firearms to be shot, and an ever-expanding universe of Kardashians to be kept up with (and now a Caitlin). Let me summarize. The reports claim that the global warming has been occurring since the Nineteenth Century and its effects, including heat waves, droughts, flooding, warming in the high latitudes, and ecosystem impacts, are being observed around the world. They further allege that the primary cause of global warming is excess greenhouse gas emitted through human activity, particularly deforestation and fossil fuel use. According to these reports, greenhouse emissions rose 5.9% in 2010, and an additional 3.2% in 2011, both setting records. At this rate, the reports claim, the carbon dioxide (CO2) level could reach 560 parts per million by the second half of the century, which is twice the level it was at the beginning of the Industrial Revolution. Apparently, this increase could produce 2°C to 4.7°C (3.6°F to 8.5°F) of warming. The reports claim that Antarctica's ice sheets will continue to shrink, while Greenland's glaciers might disappear entirely, resulting in several meters of sea-level rise. The National Oceanographic and Atmospheric Administration (NOAA) alleges that the Arctic is changing rapidly, becoming considerably warmer and greener. Furthermore, the lack of sea ice will cause fundamental changes in heat exchange between the ocean and the atmosphere. Scientists have found that species are responding to climate change up to three times faster than previously estimated. Changes in habitat quality and food sources are putting wildlife populations under stress. Human society is being impacted by sea level rise, flooding, and water shortages. According to scientists, these impacts are likely to not only continue, but to intensify.

Of course, these are just facts...empty, heartless, facts. As we all know, facts are not the same thing as the truth. You don't have to believe facts, because there are always plenty of specious arguments and a panel of experts to contradict them. It is only through a careful selection and a single-minded interpretation of the right facts that we can achieve the truth we want. Dare I say, the truth that this great country deserves! In this volume, I have assembled a panel of experts, including myself, to put a stop to all of the aggressive scientific fact-mongering dominating the liberal media and provide real, patriotic answers to the issues we face.

The contributors to this volume, as respected scienticians, pundits, and other people with free time, are united in the well-reasoned view that our great country will not take a backseat to “nature”. Climate change is a hoax, and fossil fuels are a gift from God to the greatest nation that has ever existed—America. To ensure that fossil fuels remain the energy source of the future, I have formed a consortium known as Climate Researchers Advocating Petroleum and signed all of the contributors to this book up as members. In a nonsensical, fact-cluttered landscape, CRAP truly represents the true light of truth.
Download: epub mobi (Kindle) pdf more Online Reader
rtf lrf pdb txt
Price: Free! USD
Add to Library
Create Widget
Tags: democracy humor satire science freedom global warming climate change america stupidity environment and society
About Dalton Pepper

Dalton Pepper is the Nom de Pen for a serious academic whose name is actually something else. He has a PhD in a science-y subject from a university in the deep-south with a great football team. His resume also includes a long list of prestigious national and international writing contests in which he was a paid entrant. He writes fiction, non-fiction, fictional non-fiction, and non-fictional fiction, sometimes within a single sentence. Someone named Rick once commented that his writing combines the scientific insight of Mark Twain with the sense of humor of Enrico Fermi. He is adept at writing poorly in several languages, but he is be exceptionally well for written in English. He lives in California with a couple of younger women.

Okay, it is a fun read and also informative.... but gosh, there really are people out there who believe this satire is real. A few days ago I read a pamphlet by someone calling himself "Adrian Vance" who has insisted all of the world's geophysicists are lying about human-caused climate change because the laws of physics involved (quoting) "... is an expensive economy-ruining undertaking seemingly sought for the United States by international forces that could not defeat us on the battlefield, drawing board or assembly line." But this parody is still fun.

You have subscribed to alerts for Dalton Pepper.

You have been added to Dalton Pepper's favorite list.

You can also sign-up to receive email notifications whenever Dalton Pepper releases a new book.