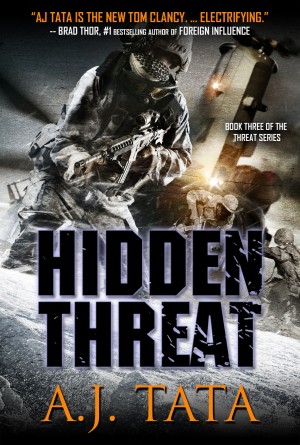 Meanwhile, Matt Garrett, Amanda's uncle, leaves his CIA post and arrives in Afghanistan to recover Zachary's remains. But first he leads a daring vengeance raid into Pakistan that results in a clue to Zachary's fate. With hopeful evidence in hand, Matt continues the search for his brother as physical reminders of him are being destroyed or attacked back home, including Riley, who holds her own secrets close.

The story alternates between thrilling combat scenes in Afghanistan and Pakistan as Matt pursues his brother's fate and attempts to complete a politically sensitive mission while Amanda races to uncover the truth about her father.

AJ "Tony" Tata's Foreign and Domestic became a National Bestseller spending two weeks on the Barnes and Noble mass market paperback bestsellers list, ranking as high as #6 during its third week in publication. Foreign and Domestic begins a new series from Kensington Books/Pinnacle featuring Native American former Delta Force soldier Chayton Mahegan who is "outside the law, under the radar, out for vengeance..." Tony is also the author of the critically acclaimed, award winning, and Amazon bestselling Threat Series fiction novels featuring the Garrett Brothers, Matt and Zachary. A fourth Threat series novel was released in January 2015 and became the number one downloaded book on Amazon's thrillers list.

Retiring in 2009 as a Brigadier General, Tony has appeared frequently as a guest commentator on FoxNews' The O'Reilly Factor, America's Newsroom, Fox and Friends Weekday and Weekend Editions, The Daily Buzz, NBC's Today Show with Jane Pauley, The South Florida Today Show, The CBS Early Show, local television stations around the country, and scores of nationally syndicated and local station radio interviews.

Graduating from the United States Military Academy in 1981, his many assignments as a paratrooper and combat infantryman, include command of a paratrooper battalion in the 82nd Airborne Division and an air assault brigade in the 101st Airborne Division. His last combat assignment was as the deputy commanding general of the 10th Mountain Division and Combined/Joint Task Force-76 in Afghanistan. BG Tata has deployed on combat missions and operations in Afghanistan, Kosovo, Macedonia, Bosnia, Panama and the Philippines. He has been awarded the Combat Action Badge and Bronze Star, is a Master Parachutist and a graduate of the U.S. Army's Ranger School.

Tony served as a National Security Fellow at Harvard University's JFK School of Government, and earned an M.A. in International Relations from the Catholic University of America and a Master of Military Art and Science from the Army's School of Advanced Military Studies. Notably, he is listed as a distinguished member of the 502nd, 504th, and 505th Parachute Infantry Regiments. He is also a graduate of the Broad Superintendents Academy and served as the Chief Operating Officer of Washington, DC Public Schools during Michelle Rhee's tenure as Chancellor and went on to lead the Wake County (Raleigh), North Carolina public school system, the 16th largest in the nation. He served as the Secretary of Transportation for the state of North Carolina from January 2013 to July 2015.

Tony is an avid surfer and enjoys spending time with his two children, Brooke and Zachary.

You have subscribed to alerts for AJ Tata.

You have been added to AJ Tata's favorite list.

You can also sign-up to receive email notifications whenever AJ Tata releases a new book.