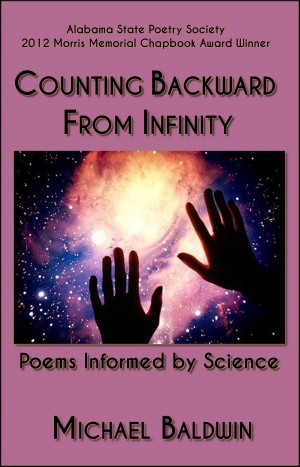 Michael Baldwin, a self-professed descendent of the Lakota mystic warrior, Crazy Horse, was born and reared in Fort Worth, Texas, amid the olfactory cornucopia formed by its stock yards, rendering plants, and chemical factories. His youth was misspent exploring the fields, rills, and fossiled hills of North and West Texas with his totem animal, the horned toad.
Mr. Baldwin holds a B.A. in Political Science, a Masters degree in Public Administration, and a Masters in Library Science. His career has primarily been that of a public library administrator, but he has also been a field operations supervisor for the U.S. Census, and a professor of American Government.
Mike’s Slam Poetry Manual was published by the American Library Association in 2003. Mike’s book, Scapes, won the Eakin Poetry Book Award, 2011. His chapbook, Counting Backward From Infinity, won the Morris Chapbook Award, 2012. His poetry has twice been nominated for the Pushcart Prize and was featured on the national radio program The Romantic Hours. Mike published a mystery thriller novel, Murder Music, in 2014, and a book of science-fiction short stories, Passing Strange, in 2015. He has also been widely published in poetry journals and is the author of 8 self-published chapbooks.
Mike was a juried poet of the Houston Poetry Festival, and has presented at the Austin International Poetry Festival, the Langdon Literary Weekend, and the Montgomery County Literary Arts Festival, which he co-founded. Mike also co-developed and presents a creative writing workshop: How To Find Your Creative Mind: Using Neuroscience and Mysticism To Enhance Your Creativity. Mike is current president of the Fort Worth Poetry Society.

You have subscribed to alerts for Michael Baldwin.

You have been added to Michael Baldwin's favorite list.

You can also sign-up to receive email notifications whenever Michael Baldwin releases a new book.