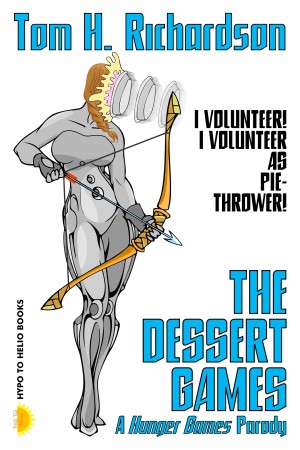 By Tom H. Richardson
Karen Ebergrimm and twenty-three other kids throw pies at each other’s faces in an “arena,” in order to determine who will win Dessert Privilege in the Panem school system. Karen has volunteered for the Dessert Games for her sister Primmy. Karen doesn’t know what to think about Poofa Meadowlark, who’s also in the Dessert Games and also from School Zone Twelve, who tells Karen that he loves her. More
Primmytwoshoes Ebergrimm wants yellow cake with chocolate frosting in her school lunches. Right now, this is not allowed. Alas, Primmy has been given only one shot at earning Dessert Privilege—and she knows that if she tries, she will fail. Primmy’s older sister Karen volunteers to take Primmy’s place in the Pie-Throwing Elimination; Karen pledges to sign over Dessert Privilege to her younger sister when Karen wins.

Wait, what? What is going on?

Verylongnameus Ice, the Superintendent of Schools for the Panem (Colorado) Independent School District, is an evil man. He decreed in 1982 that desserts would not be sold as school lunches, nor were kids permitted to bring desserts from home. Soon after making this decree, Ice was persuaded to grant a small exception—

Each year, one boy and one girl would be randomly selected from each school zone (Panem ISD has twelve). The boy and girl would be bussed across town to the school-district football stadium. There the twenty-four students would form a circle, then try to throw pies in each other’s faces. When only one kid had a face not-pieed, that kid would be the winner of the Pie-Throwing Elimination. He or she would then get Dessert Privilege for as long as he attended Panem schools.

This year, Primmytwoshoes Ebergrimm, a School Zone Twelve seventh-grader, is Selected to be in the Pie-Throwing Elimination. _How delightful!_ Except that Primmy broke an arm and a leg rescuing a kitten from a tree; body parts in a cast means that Primmy has zero chance of winning the Elimination; and Primmy being Selected this year means that Primmy will never be Selected again. _How awful!_ Older sister Karen does not want Primmy to feel sad, so Karen volunteers to take Primmy’s place.

Karen thinks that what she has volunteered for is a simple, five-minute contest—but there are some things Karen does not know. Karen is especially in the dark this year, because Superintendent Ice just changed the rules. This year the Elimination takes place in an “arena.”

Karen _does_ know about one complication to her plan: The male selectee from School Zone Twelve is Poofa Meadowlark, and he is in love with Karen. “You go your way, and I’ll go mine” will not work with this boy.

MAY THE ICE CREAM BE EVER IN YOUR FLAVOR.

_Note: This book is written for middle-school readers._

PUBLISHER'S NOTE: All ebooks by this publisher are free of DRM (Digital Rights Meddling).

Tom H. Richardson is a publisher and author. As author, he has written the political novel _Sun Rising In The West: Does Japan Buy California?_, the humorous _The Dessert Games: A Hunger Games Parody_, and the YA novel _Cinderella, Zombie Queen_. He also has sold three short stories to the online magazine _The Grantville Gazette_. As publisher, he founded Hypo To Helio Books. (The name means “under the sun.”)

You have subscribed to alerts for Tom H. Richardson.

You have been added to Tom H. Richardson's favorite list.

You can also sign-up to receive email notifications whenever Tom H. Richardson releases a new book.