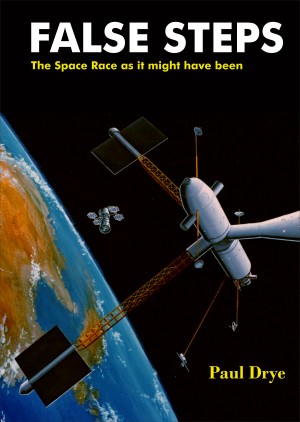 False Steps: The Space Race as It Might Have Been

By Paul Drye
Rated 5.00/5 based on 1 review
A popular history of the many spacecraft that might have taken us to space, but that fell short for one reason or another. Based on meticulous research from the best available sources, including those long kept secret in Russian archives. With more than two dozen images and diagrams of the space projects that never quite got off the ground. More
There have been many different ways that the United States, USSR, and other countries have tried to put people into space. Very few of them have succeeded. From the precocious rocketry of Germany in World War II to the latest proposals from NASA and RSC Energia, this book covers the rockets, space capsules, shuttles, and more that might have made their mark on history like Apollo 11 -- but didn't. Meticulously researched from the best available sources, including those long kept hidden away in Russian archives until recently, False Steps is a lively, illustrated, and informative journey through some of spaceflight's least-known and most interesting projects.

Reviews of False Steps: The Space Race as It Might Have Been by Paul Drye

The Nazis had a plan to put a huge mirror in orbit that could focus sunlight on military targets and boil ocean water to generate electricity in peaceful times. During the war, the Nazis also had plans for a space plane that they intended to use to bomb New York. In the fifties, the British had a space program that they abandoned. The US Army planned to build a base on the moon and keep a permanent detachment of soldiers there. Their launch site was to be on Christmas Island. The Soviets’ premier rocket designers worked from a forced labor camp. The Japanese had a space program. There was an American proposal to create a spacesuit that would allow stricken astronauts to parachute from orbit. As a precautionary measure for the Apollo moon landing, a design was proposed for stranded astronauts to blast off the moon’s surface in a rocket-powered chair.

Paul Drye recounts over fifty space flight schemes that worked, failed, or were laughed off the drawing board. All of the spacefaring nations and some that you never expected to fall into that category are represented here. False Steps is an intriguing collection of space trivia that will fascinate space enthusiasts, engineers, and nerds in general. The remarkable depth of research the author has done is nothing less than astounding. I was delighted to learn that on a proposed long-term mission to Venus, astronauts were to be allowed to take two kilograms of movies and one and a half kilograms of recorded music. Using kilos as a unit of measure for music and movies had not previously occurred to me; although, in retrospect, I can think of plenty of music that ought to be judged in kilograms. Mr. Drye’s writing style is crisp and clear if necessarily burdened by acronyms and initials—he is, after all, recounting military and governmental jargon. False Steps captivated me from start to finish. Anyone interested in space and technology will love it.

You have subscribed to alerts for Paul Drye.

You have been added to Paul Drye's favorite list.

You can also sign-up to receive email notifications whenever Paul Drye releases a new book.