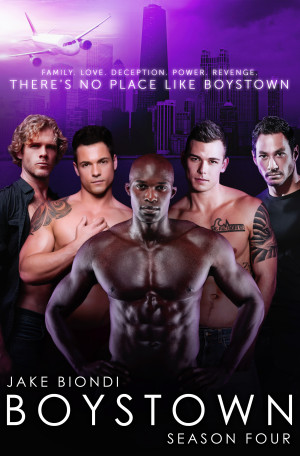 Rated 4.00/5 based on 1 reviews
The horrific night club fire leaves lives and relationships forever scarred. As the flames die down and the smoke clears, survivors struggle to rebuild. At the same time, the race to save Derek Mancini and to bring his shooter to justice begins -- while the search to identify the new Mancini brother continues. More
“From outside the building, flames could be seen and yells could be heard. In the distance, the sound of fire truck sirens gradually grew louder. As the club windows shattered, fire and smoke emerged, working their way up into the sky. The wind pushed the smoke across nearby blocks quickly and it soon passed over the area where Derek’s bloody body rested on the ground. The moon hung high over the city of Chicago, casting its warm glow on everything beneath it.”
-BOYSTOWN Season Three

The horrific night club fire leaves lives and relationships forever scarred. As the flames die down and the smoke clears, survivors struggle to rebuild. At the same time, the race to save Derek Mancini and to bring his shooter to justice begins -- while the search to identify the new Mancini brother continues.

More catastrophic than the fire, a special birthday celebration propels lives in dangerous directions. While some work to end the Mancini-Ciancio feud permanently, others use it as motivation to put a life-threatening plan in place. Meanwhile, two couples prepare for their weddings, one couple struggles to survive its secrets, and a new couple forms an alliance that will ultimately destroy several people around them. Plus, the arrival of a new doctor and his son to Boystown impacts the lives of everyone they meet.

It all builds up to a wedding weekend that will leave the lives of Boystown residents in peril.

Growing up in the suburbs of Chicago, Jake Biondi fell in love with "The Windy City" at an early age. He left the Chicago area for four years to attend the University of Notre Dame, from which he graduated with degrees in English and Business. He was awarded the university’s prestigious William Mitchell Award for Playwriting. Upon graduating from Notre Dame, Biondi returned to Chicago where he attended and graduated from the Loyola University Chicago School of Law. He has been living in Chicago's Boystown neighborhood for over 20 years.

While studying literature, Biondi became a huge fan of Charles Dickens whose novels were originally released in installments, each ending in a cliffhanger to keep readers coming back for more. Because of his love of those novels as well as television dramas such as Dynasty, Knots Landing, Dallas, and Revenge, Jake Biondi decided to create a serialized saga for contemporary audiences. Thus, the BOYSTOWN series was born.

Jake Biondi began BOYSTOWN in June of 2013 as an online story and intended to release one "episode" online per month, each ending in a cliffhanger. The story became so popular -- and the online reading audience grew so quickly -- that people from all over the country began to email him demanding to know what happened to their favorite characters and wanting the episodes to be released faster. They also had suggestions for future storylines. Excited by and grateful for his readers’ responses to BOYSTOWN, Biondi began to write and release installments more quickly.

In November of 2013, Biondi moved BOYSTOWN offline and published the first ten installments in book form as BOYSTOWN Season One. The book became an international hit, with fans all over the globe clamoring for more. Since then, Biondi has released eight additional BOYSTOWN series books.

Because of the popularity of the book series, fans have suggested that BOYSTOWN be turned into a television series. Biondi recently completed the TV scripts for the first season of BOYSTOWN and hopes to bring the series to television in the very near future.

In 2019, Biondi introduced his thrilling MAJESTY series, a period drama about the royal Chamberlain family. Like BOYSTOWN, MAJESTY has been embraced by fans who love action-packed twists and turns as well as a touch of romance.

Just like a soap opera, story bounces all over multiple characters. all subplots get resolved....eventually leading to more stories. People die, or do they? and at the end, multiple side by side cliffhangers you just have to wait to read in the next book/"season" . Takes a while to read each book, so if you get hooked, be prpared to buy them all

You have subscribed to alerts for Jake Biondi.

You have been added to Jake Biondi's favorite list.

You can also sign-up to receive email notifications whenever Jake Biondi releases a new book.