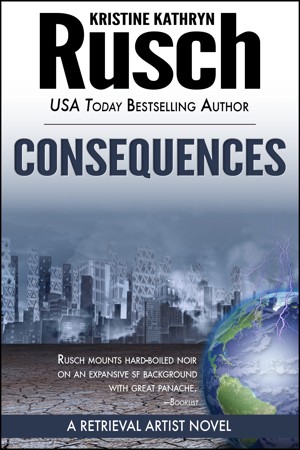 By Kristine Kathryn Rusch
Rated 3.00/5 based on 1 review
Mixing interstellar politics and police procedural, Rusch turns out a satisfying SF mystery. Flint’s internal conflicts are deftly portrayed, and the gritty realism of the murder investigation meshes well with the alien setting.

This [third] entry in the Retrieval Artist series should please SF and mystery fans alike, and can be read independently.

RT Book Reviews More
A woman dies in the domed city of Armstrong on the Moon. Detective Noelle DeRicci discovers that the victim is a Disappeared—an outlaw in hiding wanted for crimes against an alien civilization. Only DeRicci’s old partner, Retrieval Artist Miles Flint brought the Disappeared home, something he would have only done if he believed the alien government would exonerate her for her crimes.

But Flint and DeRicci are no longer partners; in fact, they’re on opposite sides of the law. Flint can’t tell DeRicci about his client’s role in a war between humans and a mysterious alien race. The Disappeared’s death is only the first volley in an escalation of that war, a war that threatens to engulf the entire solar system.

Interesting book. At times, I was wondering what the story segment had to do with the overall view, but it's all tied together at the end, and it all makes sense. It's a good story, though if it didn't take place on the moon, I'm not sure we could qualify it as scifi, but that's a side note, for those who like their scifi on the hard side of things. Otherwise, it was a pretty decent mystery story, and even if you're not a scifi fan, if you're a mystery fan, you'll probably enjoy this one.

(reviewed 2 years after purchase)
Nancy Beck reviewed on Jan. 21, 2012
(no rating)
If you're not into hard SF, this might be the ticket for you, and it combines both SF and mystery in a satisfying way.

Miles Flint, former Moon detective, is now a Retrieval Artist, someone who specializes in finding those who have Disappeared; the Disappeared are those who've gone into hiding usually because of committing crimes (sometimes unwittingly) against space aliens.

In this case, a judge and his wife, a doctor, hire Miles to find their daughter, who supported the rebels on an alien planet, even joining up with the rebels in their war. She's been pardoned, and so she is persuaded to go with Miles, who takes her back to her parents.

In a gruesome scene, all three are murdered. But by whom? And why?

Miles feels guilty, and decides to track down the killer or killers - on his own dime. We also get to meet up with Detective DeRicci again, who has become a minor celebrity of sorts, for her "heroism" in the prior novel...

I've become a major fangirl with this series, because it combines soft SF, mystery, and political intrique. Ms. Rusch has a deft hand at weaving all three strands into this tale, with twists and turns abounding in a fascinating - and believable - way.

Did I mention I'm a fangirl of this series? :-)