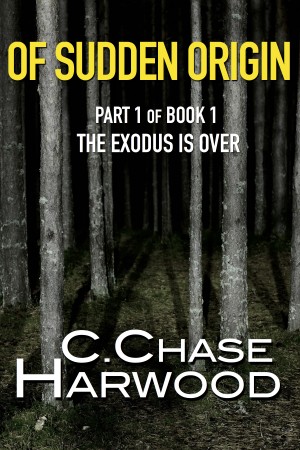 Of Sudden Origin Part 1 - The Exodus Is Over

C. Chase Harwood made a career in Hollywood, decorating sets for film and television before turning his passion for story telling into clicks on a keyboard. While scaling the walls of the screenwriting world, he chose to experiment with prose and found a fondness for Scifi-action-adventure. Within that framework he gets to explore the countless ways that humans interact while under duress. "Life is all the more lived when the consequences are high. When told as a tale it can be quite a page turner," says Harwood. He lives in Los Angeles with his costume designer wife and young boy girl twins.
The following are some other storytellers with whom the author finds a kindred spirit: HUGH HOWIE, STEPHEN KING, SCOTT SIGLER, DJ MOLLES, RHIANNON FRATER, SEAN PLATT, JUSTIN CRONIN, JAMES S.A. COREY, PETER CLINES, SUZANNE COLLINS, ERNEST CLINE, MAX BROOKS, VERONICA ROTH, LOIS MCMASTER BUJOLD, ORSON SCOTT CARD
"Pretty big shoes…”

Reviews of Of Sudden Origin Part 1 - The Exodus Is Over by C. Chase Harwood

You have subscribed to alerts for C. Chase Harwood.

You have been added to C. Chase Harwood's favorite list.

You can also sign-up to receive email notifications whenever C. Chase Harwood releases a new book.