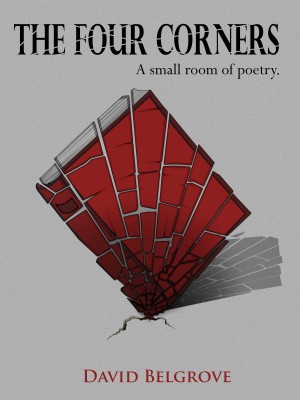 The Four Corners (a small room of poetry)

By David Belgrove
The four corners is a small room of poetry big on emotive text. Within those corners is a tale which is honest, sometimes brutal but also contains a release of something thought always trapped. Within the pages are offerings from over two decades of scribe, a heady mixture of history and powerful ideas. There is exposure and honesty with the potential to link with you, the reader. More
the four corners contain a varied collection of poetry that has been compiled from work stretching back over 20 years. the four corners themselves thread through the collection and are linked in purpose and intent. those 4 poems tell a story to which the reader must unravel, decipher but ultimately make up their own mind about. within the text is a mix of emotion, storytelling and exposure to aspects of life that are often common and shared among us. i have tried to include unique approaches, view points and angles that are uncommon but also tried to share a vulnerable side with words that contain power. the four corners is spirited, sometimes potent but always honest and carefully paced. words remain within its pages that still excite me as a writer and make me wonder, what next?
Download: epub mobi (Kindle) pdf more Online Reader
rtf lrf pdb txt
Price: Free! USD
Add to Library
Create Widget
Tags: poetry poetry book survival poetry poetry about freedom poetry about relationships loss and redemption poetry about life experiences freedom and empowerment poetry about destiny poetry with a mix of themes
About David Belgrove

David Belgrove grew up in the heart of England. He has always had an interest in travel. When he was 20 years old David relocated to New York where he lived for a year working with young people. During his time there David developed an interest in poetry and began writing. Upon his return he continued to write and accumulate his work, at that time (the 90’s) a creative platform to publish seemed incredibly difficult. During that time David maintained his enthusiasm for the written word, particularly poetry and short stories. Once social media started to take hold the internet started to provide many avenues of possibility.

David has enjoyed many professional roles and challenges. This have included his own business enterprise and working for the National Health Service as a team leader, working with adults with special needs. David also had the opportunity in 2005/2006 to live in Northern Michigan where he worked with young people and taught aspects of scuba diving as well as outdoor education. During his varied working life David has also been involved in volunteering which has included working with and supporting youth offenders.

David strongly believes that ‘Life is for doing’, this has been reflected in living overseas as well various extreme sports that he has undertaken, including parachuting for charity and sky diving. Other achievements have included writing and stage adapting a film script as well as playing a principal character. David has also flown a light aircraft, glider, hover crafted as well as other amazing experiences which have included appearing on two television game shows.

For the past few years David has been working in education. His role involves supporting students with disabilities, learning difficulties and challenging behavior. David continues to write and travel and hopes to release more work in the future.

You have subscribed to alerts for David Belgrove.

You have been added to David Belgrove's favorite list.

You can also sign-up to receive email notifications whenever David Belgrove releases a new book.