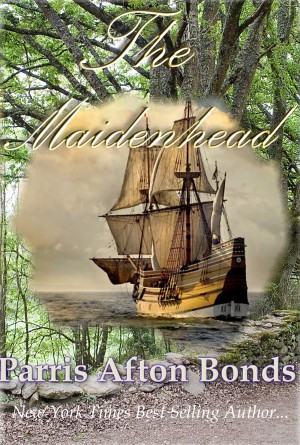 By Parris Afton Bonds
"The Virginia Company of London seeks one hundred willing maids for marriage to bachelor planters of James Cittie Colony. Maids must be young, handsome, and honestly educated."

Mad Dog Jones and Modesty Brown ~ a match not made in heaven but a love that made heaven here on earth. More
"The Virginia Company of London seeks one hundred willing maids for marriage to bachelor planters of James Cittie Colony. Maids must be young, handsome, and honestly educated."

Having read this promising broadside, Modesty Brown flees from arrest in London for the safety of married bliss in the New World. At 26, she might not be young, nor handsome, and most certainly not honest. But educated she is ~ educated enough to start her own 17th century dating service/matchmaking for the other young girls who have signed on and taken the voyage aboard the Maidenhead to contract out as brides in Jamestown.

However, upon her arrival in Jamestown, the saucy wench is accused of witchcraft by a ruthless nobleman – and it’s either burn at the stake or do her own matchmaking for herself quickly.

She contracts to wed Mad Dog Jones. His name says it all. Further, he abhors the thought of being saddled with a wife. Yet their passion for one another cannot be denied by night. And by day each is determined to be rid of the other.

Mad Dog and Modesty ~ a match not made in heaven but a love that made heaven here on earth.

I am dancing on sunshine that you are visiting my little part of Parris's paradise. I write for the reckless of heart. Not surprisingly, I identify with my novels' characters, both the protagonists AND antagonists. I suffer with their angsts and bewilderments and rejoice in their joys and triumphs. And I believe that if we heroically hold fast to our own vision for ourselves in our journey’s confrontations and challenges, then Life WILL manifest our dreams and goals and visions, as it does for my characters in my novels.
~~~~~~~~
Declared by ABC’s Nightline as one of the three-best-selling authors of romantic fiction, the award winning Parris Afton Bonds has been featured in major newspapers and magazines as well as published in more than a dozen languages. The mother of five sons and the author of over forty published novels, she donates her time to teaching creative writing to both grade school children and female inmates.

She is co-founder and first vice president of Romance Writers of America, as well as, cofounder of Southwest Writers Workshop. The Parris Award was established in her name by the Southwest Writers Workshop to honor a published writer who has given outstandingly of time and talent to other writers. Prestigious recipients of the Parris Award include Tony Hillerman and the Pulitzer nominee Norman Zollinger.

You have subscribed to alerts for Parris Afton Bonds.

You have been added to Parris Afton Bonds's favorite list.

You can also sign-up to receive email notifications whenever Parris Afton Bonds releases a new book.