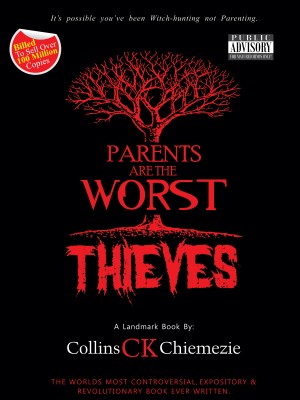 Parents Are The Worst Thieves

By Collins CK Chiemezie
A handbook for rebels and game changers who are ready to reset institutions to the original purpose of their creation; it is targeted at addressing the root killer of gifts, the extinguisher of passion and the terminator of purpose. It is not merely inspirational or motivational but positively revolutionary. This book, is in a special genre of its own, the shift genre of books; shifting the paradi More
Parents are the worst thieves is to the evolving world an answer to the enigma that has perplexed generations,limited many and stagnated the conformers, it is a revolution,transformational ,a sort of metamorphosis inducer , it has been touted as the knowledge contained within the pages will replace “one conceptual world view with another.

Science has told us that no two individuals can behave alike, irrespective of similarities or the fact that the shared the same womb, no two humans are the same, it is evident in the different fingerprint, mannerism and even in choices that are made.
Every child is a divine seed to meet a human need but every institution has got it twisted
This book is both entertaining as stories are interwoven with matters of such grave importance
And also very educative, the truth is that every belief that was shattered was completely replaced with new truths and realities.
Parents are the worst thieves starts up with what the original plan really is that is “the birth of every child is the answer to a puzzle,life’s puzzle.the thief of my lifemade us to succinctly understand that there is a far reaching essence for our existence than seeking for substance,we were never created to feed but to lead,and that was why we are the only creatures enabled with the power to create.what makes a lot of people exist without having lived is the quest to pay bills and the enervating rat race instead of discovery.
Our destinies are subtly and gradually stolen from us, yet we conform to our parents until life passes us by.
One foolish thing parents do will take you on a journey both unfair yet familiar on how love could smother rather than be safe for you ,every child should be made to discover their heartbeat.therefore when children cant find what to die for,its better if they never lived
Care takers not decision makers, witch hunting or parenting, rebels are leaders, even Animals know better, when is my child an adult, a child antenna these are just a few of what makes this piece of art a wonder to behold, more than just a storm in the tea cup, it’s a beautifully designed work a complete classic, a beacon of hope to a generation heading for a precarious cliff edge of obscurity.
From the ptolemaic system (earth at the center of the universe) to the Copernican (the sun at the centre of the universe ,from Newtonian Physics to Quantum physics , from dictatorship to democracy,gradually but assuredly old beliefs have been replaced with new beliefs.
Within this pages are contained what God knows, what devil knows but what parents don’t

Collins Ck Chiemezie, “C.k” as he’s fondly called was born into the family of 5; their poor background led him onto an early discovery and mastery of gifts. He began singing actively from age 7, as he grew actively in the act, he established couple of teenage gospel musical groups from age 14 including his hit musical gospel group in secondary school voices of angels and sounds of seraphim’s. He immediately stood out when he got into higher institution as a result of his long discovered potentials, he was simply ready to detour the environment. He began a socio-political and Media Company named CK PRODUCTIONS; shortly that took hold of nearly all the socio-political events within the campus. This led to him to contest for the office of the director of socials student union government. He won with a landslide victory; Collins popularity grew beyond the campus, he became a consultant even as a student to over banks in the town, consulting on student affairs, he began putting up events in the city of Abuja far away from his campus.
Long after his graduation from the University of Abuja his name still echoes.
A few years after leaving school, he was called upon to organize an event upon recommendation by a student. NYPAC 2010 concert turned out to become Africa’s largest youth gathering in history (Mnet’s rating); this feat achieved by Collins further established his media, in brands development and PR.
Today he’s the pioneer of two strong platforms MADE ASSEMBLY: where he dehypnotizes and save minds from the grip of religion and “churchianism”. THE SABIFICATE MOVEMENT; youth based platform with many initiatives aimed at discovery and empowering youths to live inside out against the norm outside in.
He’s the author of great books rated as the worlds most controversial, expository and revolutionary books ever written, expect so much more from Collins ck. Chiemezie 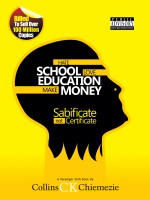 You have subscribed to alerts for Collins CK Chiemezie.

You have been added to Collins CK Chiemezie's favorite list.

You can also sign-up to receive email notifications whenever Collins CK Chiemezie releases a new book.