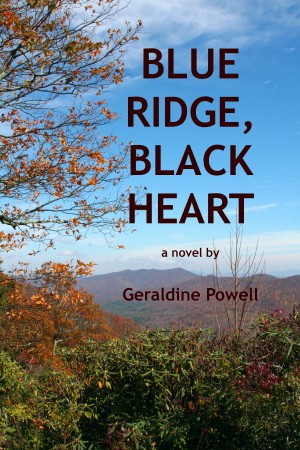 By Geraldine Powell
Rated 4.00/5 based on 1 reviews
Blue Ridge, Black Heart is a fast-paced mystery-thriller that tears through the southern Appalachian Mountains with enough suspense and action to keep you turning the pages. At times the story is even roll-on-the-floor funny. The characters all have depth and substance. Blue Ridge, Black Heart is a fun read for anyone who likes a good mystery. More
Disgraced, disbarred and defriended, ex-lawyer Morgan Pike is nearly bankrupt and desperate for a paycheck. She accepts the only job she’s been offered in a year of looking—private investigator with a Chattanooga, Tennessee firm. Morgan has been with the company for a year. Her goal is to stay out of trouble and serve the remaining two years of her four-year suspension and return to her prior life as a defense attorney in Richmond, Virginia.
Bored by divorce and insurance cases and against the advice of her boss, she becomes involved in the search for a beautiful young woman who has disappeared without a trace. The case takes her from the Blue Ridge Mountains of north Georgia to the dark underbelly of post-Katrina New Orleans and back. Her unrelenting quest for the truth propels her into terrifying clashes with members of a violent survivalist cabal in the southern Appalachian Mountains. The investigation builds to a stunning and dramatic conclusion that no one saw coming.

Here is a short excerpt from the book:

“Sunday morning I took my first cup of coffee and sat at the café table by the sliding doors leading to the balcony of my apartment. I pulled my robe close and leaned back from the table. Something flashed in the glass door. The left side of my face erupted with the pain of a thousand wasp stings. The door spider-webbed with cracks radiating from a small hole. I recognized the sound of a bullet snapping past my head.
I sat stunned, shocked, uncomprehending. A second passed, then my body reacted. I dived for the floor just as the glass in the door disintegrated. A second bullet cracked through the room, tearing into the floor a foot from my face. A third shot blasted through the kitchen wall and smashed into the dishwasher.
I scrambled on hands and knees toward the bedroom. Three more bullets ripped through the walls of the apartment. Using the bed as a shield between me and the outside wall, I reached up to the nightstand, grabbed my phone and dialed.
“911. What is your emergency?”
“Someone’s shooting at me—again.”

Geraldine Powell lives with her partner, five cats and a dog on the side of Signal Mountain near Chattanooga. She has spent much of her life in the mountains of Tennessee and southern Virginia and has an abiding affection for the southern Appalachians. She also loves mystery novels. So it’s no surprise that her first novel combines the two.
She has been a waitress, a bartender, an oystershucker, and a bicycle messenger. She has sold encyclopedias in the coal fields of West Virginia and managed construction companies. She is an award winning ceramic artist and for a short time owned an art gallery. Now she and her partner operate an orchid nursery.
She brings this broad experience and an unusual sense of humor to her first novel, “Blue Ridge, Black Heart."

I have to confess a weakness for the mystery genre told from the first-person. When done right, nothing much beats it, but you need a solid narrator. Characters like Elvis Cole (Robert Crais), and Penn Cage (Greg Iles) have consistently entertained me over the years, so consider that a bias.

As a point of comparison, while reading this, I was actually reminded a little bit of a female police detective created by author J.A. Konrath. That was a fantastic narrator, with depth and about 30 neuroses. Unfortunately, the author surrounded that character with cardboard secondary characters and often stomach-churning, outlandish plots. In Blue Ridge, Black Heart, author Geraldine Powell's lead character lacks some of the depth, but makes up for it with a solid supporting cast, a fluid narration, and a plot that unfolds naturally and never feels forced. In other words, I think she gets it right. Her prose is almost conversational, without being breezy or lazy. I hope that makes sense. It's enjoyable to read the narration, even when the plot isn't barreling forward.

There are a couple of miss-steps along the way, like a trip to New Orleans that fails to build suspense or really move the plot along. Some character building saves it, but just barely. There is also a relatively narrow list of suspects that's paired down almost immediately, leaving little room for the reader's mind to wander or for the author to play. I'm nit-picking, though. I usually find at least one thing to nit-pick in a novel, and there it is.

From the beginning, I felt the author was right at home in the Blue Ridge Mountains and the surrounding areas of Tennessee and Georgia. She knows the region and uses it to her advantage, while supplying an intriguing backdrop with a lot more dimension than the constant stream of meth dealers in, say, the Tennessee-centric television show Justified. Her knowledge helps her easily build each scene and draw the reader into the world of Morgan Pike. Morgan is a tough gal without being a caricature, she's humorous without being a clown, she's an everyday hero with everyday flaws who frequently gets it wrong. That makes her both likable and relatable, which is incredibly important in this type of story.

Could Morgan Pike novels become a series? I hope so. She got the name for it. It depends on what the author wants to write about. A quick scan of Geraldine Powell's bio indicates her interests and experience are pretty much everywhere. That means she has a lot of material she can mine if she wants to keep the character going.

Blue Ridge, Black Heart is a fun and absorbing read. If the author can keep this up (and if she wants to), it could be a great series.

You have subscribed to alerts for Geraldine Powell.

You have been added to Geraldine Powell's favorite list.

You can also sign-up to receive email notifications whenever Geraldine Powell releases a new book.