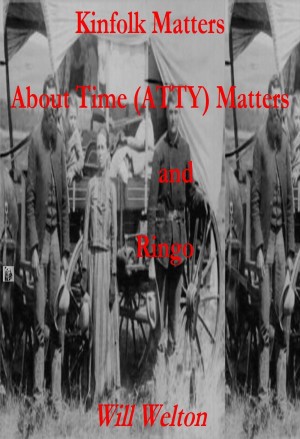 By Will Welton
This is only the story of one of the Matters Family and someone who was adopted by About Time Matters and her Uncle Frank Matters. There were eight of the Matters children full kin or just adopted. So there are more books to come about the family members. How they survived the War Between the States and their movement to the west in search of a new and better life. More
ABout Time Matters was the only girl in the family and she wanted everyone to call her Atty. The reason for strange names of the children of the family was his father and mother had the first three children die before they were a year old. They had been told by a old granny women which had been the mid wife for the births that they were bad names and if the male of the family named them such that the children would not live.
When she was eighteen she married the local Blacksmith that was unable to go to war. Since cash money was hard to come by at the end of the Civil War Atty and her husband decided to go out west. They loaded the anvils and any thing that was iron on the wagon that they built.
Her Uncle and her brother had told of how things were and the opportunities that abound in the Dakotas. On the way out Atty’s husband was injured by one of the six mules used to pull the wagon and he committed suicide. Atty continued on with the help of a young boy who decided he wanted to be called Ringo.
Atty’ and her Uncle, after Ringo’s help to evade the law, they told him if he wanted to he could use the last name of Matters. He started a smithy shop, at the age of sixteen, two miles from town and later became the law and a prominent citizen as the town grew.
No one knew exactly why Frank Matters evaded the law but he had a way of disappearing when the law showed up or near some towns he would only by pass and not enter.
Available ebook formats: epub mobi pdf rtf lrf pdb txt html
First 10% Sample: epub mobi (Kindle) lrf more Online Reader
pdb
Price: $6.99 USD
Buy Add to Library Give as a Gift
How gifting works
Create Widget
Tags: gold guns family horse dakota mule wagon kinfolks black himsl of dakota sliver
About Will Welton

I grew up during the 1940’s and 1950’s, in the Choctaw (McCurtain and Choctaw Counties) and Creek Indian (Okmulgee County) Nations of Oklahoma, with the spoken languages of Choctaw, Ojibwa, Spanish and English was an asset in my knowledge of story telling. Most of the time I lived on Jamaica Street in Idabel Oklahoma. My stepfather knew a lot of the old outlaws of the late 1800 and the early 1900. there were a lot of old men living on the street that my stepfather said were old outlaws and old lawmen from earlier times.
When I entered school I had trouble with writing down the English language for the way we spoke where I lived was not what I was being told so my writing was atrocious. As I advance in the grades at school my writing was not getting better. I got a job working doing part time work at the State Theater when I was only ten years old. A reporter, that worked part time at the theater when the owner was out of town or needed to do other things, for the McCurtain County Gazette told me, “Write down the stories and the things you have done in life for some day they would be useful in keeping the tales of the old folks alive after we all are gone.” I took his advice and he helped me in my writing of what I heard in the neighbor hood and it helped me immensely in junior and senior high school at Idabel.
I was working various jobs from the age of twelve doing things from cowboy, working with cattle, loading lumber or fence post on to trucks, building fences and farmer, hoeing cotton, picking cotton, stripping corn, and plowing. When got my driver licenses I started driving small trucks and hauling freight and hay. Form there I went to work for the Saint Louis San Francisco Railroad as a labor and later carpenter rebuilding wooden bridges to holding, the positions of Foreman of a bridge gang.
I enlisted in the army as a buck private and worked my way up in rank to hold the position of Command Sergeant Major of a battalion in the Army. The experience gave me the opportunity to meet a wide variety of people. I was medically discharged from the military with an honorable discharge. After a few years and I got my health up and running, so to speak, I did construction work until finally being forced to retire completely because of my health.
Moving near Russellville Alabama because my two sons came to this area to work and raise my grand-children. After over twenty years here on the mountain top my wife and I bought coming to this area we enjoy the people and the country side. Now I live and play near the Crooked Oak community near nine of my grand-children and my one great grand children.
I have written short stories, young adult books, free lance magazine articles, articles for several news papers and write novels about the tales of the old folks when I was growing up. In addition, to the western novels, I have also written two mysteries of modern day times.

Learn more about Will Welton

Reviews of "Kinfolk Matters" About Time Matters & RIngo by Will Welton

You have subscribed to Smashwords Alerts new release notifications for Will Welton.

You have been added to Will Welton's favorite list.

You can also sign-up to receive email notifications whenever Will Welton releases a new book.