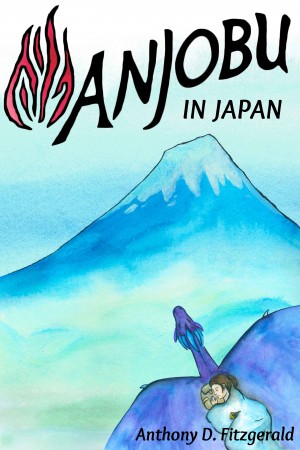 The story of how I became an author and eventually wrote ANJOBU, is probably not the typical story of many writers.
As a child I found books rather boring and I preferred to pass the time watching TV or playing video games. It was not until I was 19 years old that a book called "The Lord of the Rings" turned me on to reading. From then on, people always saw me with a book in my hand for years. It was also during this time that the dream of being a writer first inspired me. I even started to work on a manuscript. However, I quickly realized how much work it actually is to make a real book out of a story and so the manuscript was never completed. When I then finished school and started working, both reading and writing faded into the background.

At 21, I was suddenly grabbed by the travel bug and I went abroad: first to Ireland, then to New Zealand. There I worked in banking and insurance as a clerk and happily lived that way for several years. But more and more I realized how my office jobs no longer satisfied me. In fact, I became depressed about my job situation. I had begun to feel as if I sold my life for a salary. Had one asked me as an adolescent, what I wanted to do in my future, I certainly would not have answered that I wanted to work in an open plan office. But as life sometimes goes, one decision follows the next, and suddenly you find yourself in a situation in which you never wanted to be.
One thing was clear: it was time to change something in my life!

I thought about what I should do and remembered that I had always enjoyed writing in my youth. Suddenly the dream of being an author was alive again.

But to be a writer is not easy. I worried whether I could actually pull it off. I often spoke with Beate, the illustrator of ANJOBU, during that time. She and I had already been very good friends before ANJOBU. Because Beate studied literature, her opinion was especially important to me on this matter. Immediately, she encouraged me to start writing again and gave me the strength to hold on to that dream.

A few days later the decision was made: I really wanted to try it; I wanted to be a writer!

That I became a children's book author has a reason too. I must confess that I love cartoons. This kind of art has always struck me as one of the most creative and I was impressed by the kind of ideas writers and artists came up with together.
While I intensely devoted myself to media for children, I also realized how much I liked the fact that it actively tried to teach children values such as honesty, fairness and friendship. I was convinced that the world would be a better place if we would continue to remind adults of these values.

Thus, I made exactly that my task with ANJOBU: I wanted to improve how people interacted with each other and wrote adventures designed to convey the morals of a children's book, but which were interesting and exciting enough to inspire adults to read them too.
Now that I myself had a son, the idea of making the world a little better was more important to me than ever. This is also the reason why ANJOBU donates 10% of its profits to families in need every month.

There is just one last point I would like to address. Maybe you remember how I said at the beginning that I thought as a child that reading was boring. This mistaken belief, which I shared with many other young people, I wanted to resolve with ANJOBU. It was my goal to create a modern and interesting book that could motivate children to read even in the technology-oriented world of today. Therefore, I often oriented myself towards new media such as TV series and video games, instead of traditional books, during the development of ANJOBU. And every time parents joyfully tell me how an ANJOBU book has been read by their family on their tablet, and how delighted the children were, I am glad that I kept my dream of becoming an author.

You have subscribed to alerts for Anthony D. Fitzgerald.

You have been added to Anthony D. Fitzgerald's favorite list.

You can also sign-up to receive email notifications whenever Anthony D. Fitzgerald releases a new book.