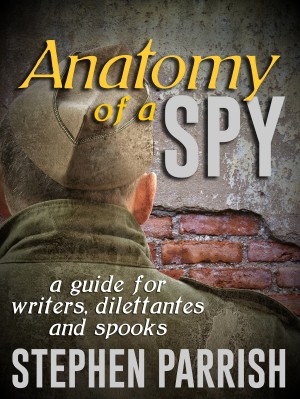 Anatomy of a Spy: a Guide for Writers, Dilettantes, and Spooks

By Stephen Parrish
Anatomy of a Spy is a brief sketch of the quintessential American spy. The author draws on his experience serving under Clyde Lee Conrad, one of the most notorious turncoats in American history. Written primarily to help authors of espionage fiction, it will also enlighten readers as well as anyone interested in the little-known facts and bizarre reality of the world’s second oldest profession.

Stephen Parrish is the author of The Tavernier Stones, a #1 Amazon mystery, The Feasts of Lesser Men, and Anatomy of a Spy. In 2011 he was awarded an Independent Publisher (IPPY) gold medal. His short work has appeared in The Austin Review, Boston Literary Magazine, The Good Men Project, Foliate Oak Literary Magazine, and elsewhere, and has been read in public by Liars’ League, Lit Crawl, and other venues. He presently serves as editor of The Lascaux Review.

You have subscribed to alerts for Stephen Parrish.

You have been added to Stephen Parrish's favorite list.

You can also sign-up to receive email notifications whenever Stephen Parrish releases a new book.