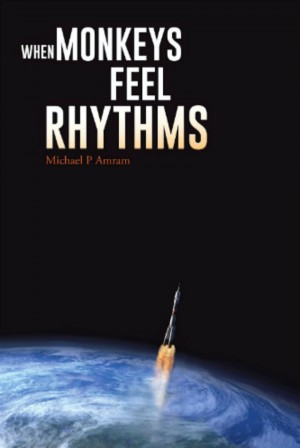 By Michael P Amram
When Monkeys feel Rhythms explores relationships. My poems wade through veins of life, from marriage to technology. The first section, "Spatial relationships," suggest ways humans see or deal with the world. More
In France the word for my is often pronounced “mon.” When Monkeys feel Rhythms taps chosen veins of humanity. The poems examine how relating to aspects of life has affected us, and how the topics I’ve chosen to write about continue to confound us in spite of their power to enlighten us. For better or worse, some poems look for how far we’ve come from times when vines swung as means of transportation. These sixty poems share a common ancestral link. They chain together the primate mentality that follows those who have prospered from life and those that life has failed. The poems investigate relationships and indicate the advances that have been made since those relative connections were discovered. Monkeys points out the need to think and communicate, all the while watching those basic primal skills deteriorate.

Mundane aspects of marriage, friendship, politics, and technology are explored. When Monkeys feel Rhythms peels back the layers of where humanity has been, what we’ve lost, and where we have yet to go. In “Evolution Lost another Tale,” a tether of technology is addressed:

“do you ever re-think the
calls you made; you’d pound steering
wheels for the roads you raged;
when bumpers were tapped abrupt
so your middle finger rose
and anger was conveyed?”

Here I show how a race of drivers has evolved. I show the distance primates have come with the wheel they once invented. The wheel’s novelty is worn out and communication can no longer wait until the end of the trip. I ask when the need to communicate defeated the distinct possibility of fatality. When did people become so self-important that they would risk their lives just to be heard? The poem illustrates how technology has enlarged our heads, shrunk the world, and re-aligned priorities.

Metaphors often disguise malignancy. My poems find cancers in society. The rhythms shake; they quiver and flush out the benign. I invite you to examine what is peeled back. When Monkeys feel Rhythms will make you laugh. Some might make you cry. Others look for the moments you like to say “a-ha.” Some are bold, others are shy. I hope you find reading them as fun and enlightening as writing them was.

I have been a published author since 2005. I first published a nonfiction book called, rhetorically, Would God Move a Ping-Pong Table? It is sub-titled “a cumulative analysis of faith and religion. No, I honestly do not think God would move a Ping-Pong table. But it was moved in 1988 in a dormitory at the University of Minnesota-Duluth, and my Christian dorm mate still insists I attribute this act to my prayers to God.
I graduated from the University of Minnesota- Duluth with an English degree and a passion to write. I worked full time jobs and wrote on the weekends. I even kept a journal for a few years. In 1998, from a series of short stories based on experiences working at a health club, an obscure Canadian publication published “The Den of Antiquities” under the pen name M.B. Moshe.
I wrote. . .and I wrote. I filled 3.5 floppies with text; fiction and vast catalogues of poetry. I look back now and see how I got tighter (in writing). I see how my writing pecked for, and finally found that voice that is imperative. I am always improving (you judge), finding the voice that is me, but still observant of my audience and their accessibilities.
In 2011 I began writing about an incident I observed in a small local barber shop. An Orthodox Jewish man entered with his young son. He instructed the barber to take a little off the sides for his boy. From that happening, ideas surmounted, culminating into my first historical fiction novel, The Orthodoxy of Arrogance. I looked at some indie publishers and decided on one. The novel came on the market in January of 2013.
When I was a single man, I traveled. I’d go to Europe and the Mid-east brash and free. Sometimes I bit off more than I could chew. In the spring of 2013 I published Scenes the Writer Shows {forty-one places a poem can go}, many of which are based on those travels.
Now, at 50, I consider myself part of the comparatively small family of writers who follow only the direction of their muse. I have few commitments. For the foreseeable future, I have no intent of going back to the confines of a forty hour work week in the corporate game of drones. Slowly, with each publication, each tweet mentioned or morning haiku, I like to hope I am getting closer to not being.
I published a second novel and poetry collection in 2014. I am currently compiling a memoir about growing up in the midst of the DFL (Democratic Farmer Labor) during the pivotal years of efforts to end the Vietnam War. I also published my third poetry collection in July of 2015. My published and unpublished work can be viewed at www.michaelpaulamram.weebly.com. 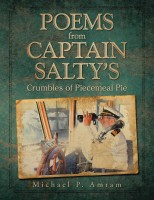 You have subscribed to alerts for Michael P Amram.

You have been added to Michael P Amram's favorite list.

You can also sign-up to receive email notifications whenever Michael P Amram releases a new book.