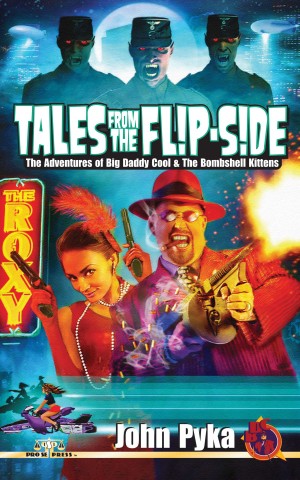 Tales from the Flip-Side: The Adventures of Big Daddy Cool and the Bombshell Kittens

By John Pyka
In 1946 a chronal event ripped a hole in space-time, transporting ex-Gangster turned Entertainer "Big Daddy Cool" Johnny Dellarocca into the future. Now, tethered to this new time, Dellarocca can travel into his past to influence events to shape the present, his future. Mobsters. Vampires. Nazis. Showgirls. Masked Vigilantes. High stakes adventure in an alternate Dieselpunk history! More
He began life as a Gangster…
He found a new path as an Entertainer…
He never knew how far he’d go to end up a Hero.

In 1946 a chronal event ripped a hole in space-time, transporting ex-Gangster turned Entertainer "Big Daddy Cool" Johnny Dellarocca into the future. Now, tethered to this new time, Dellarocca can travel into his past to influence events to shape the present, his future. Tales From The Flip-Side reveals the tale of one of the earliest adventures of Big Daddy Cool & The Bombshell Kittens leading up to that day in 1946.

In the final days of WWII, Chicago Holo-Visor reporter Penny Lane has been kidnapped and is being held for ransom by Chicago's most infamous villain, Dr. Diablo. With Chicago's masked heroes on a secret mission in Europe, it is up to "Big Daddy Cool" and his super-powered showgirls, The Bombshell Kittens, to stop Dr. Diablo and save Chicago's most beloved reporter from the machinations of the madman. However, behind the scenes there is another threat, a greater evil lurking, pulling the strings and seeking universal domination.

For over 20-years John B. Pyka has set himself apart as a performer with a theatrical fusion of magic and music.

John has performed for millions of people in nearly every venue imaginable; from Music Row to Las Vegas, and has recently appeared Off-Broadway in New York City in his own production of the original Club Roxy Revue!

One of John's talents as a performer is to create unforgettable, larger-than-life characters. He has played some of the great characters in theater like The Cowardly Lion, Rooster Hannigan, Marryin' Sam and Mr. Bumble. He has created several original characters, including the 1940's swing hipster Big Daddy Cool, and the past-his-prime vaudevillian Uncle Eddie Sparks.

John's shows fuse music, magic and theater in a program suitable for venues and events looking for something fresh and unique. There are no tuxedos, no cheesy jokes, and never a top hat or rabbit in sight! 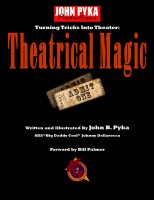 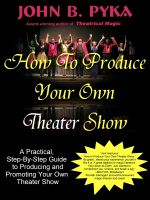 You have subscribed to alerts for John Pyka.

You have been added to John Pyka's favorite list.

You can also sign-up to receive email notifications whenever John Pyka releases a new book.