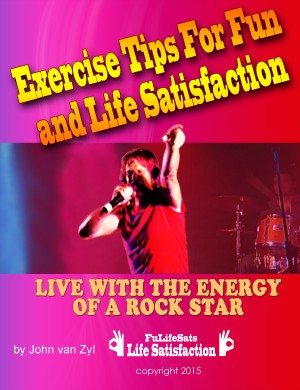 By John van Zyl
Motivational tips to inspire people to keep exercising regularly and to make exercise fun and easy, so you never want to give it up. More
The narrator is an "Old Rocker" who gave up exercise, fun and his life passion for 10 years, then suddenly woke up and said "ok, that's enough of that, it's time to dust off The Stones records and crank it baby, we're gonna have some fun!" He realized that he needed to be healthy and really fit, so started an exercise routine that's makes him feel heaps better about himself, and doesn't take up much time. So, this book shares ten of his best motivational exercise tips that will make exercise fun so you'll never want to give up either.
Download: epub mobi (Kindle) pdf more Online Reader
rtf lrf pdb txt
Price: Free! USD
Add to Library
Create Widget
Tags: fitness advice exercise motivation fitness and exercise exercise fun
About John van Zyl

The last thing I want to do is make this drawn out and boring so I’ll just stick to the important stuff.

My parents emigrated to Australia from Holland in 1952 when I was 6, there was a building boom starting here and my father was a bricklayer looking for a new start and a new life for his family, away from war torn Europe.

We moved out to the country in South Australia where my father built whole streets of houses, then when I was about 12 we moved to Adelaide (a city) and my life began to get a lot more interesting.

I’d been pretty keen on listening to the radio, particularly music, from an early age so by the time we moved to the big smoke I was already dreaming about becoming another famous musician.

So, from the age of sixteen until now, and I’m sixty five now my life has revolved around music, and I’ve played all sorts of different roles within it.

At sixteen I started out as a drummer, then switched to vocals, later back to drums for about five years, then I decided I’d like to learn to play piano and did that for five years and so on. The other thing I did that was kind of un rock and roll was that I learned to play classical guitar and ended up teaching it for about six years.

But no matter what tangent I went on somehow I always ended up back to what must be my first love and that’s singing and being an entertainer.

So really, to sum up, what I’m about is performing the role of Mick Jagger in my tribute band The Rolling Stones Experience and providing information about staying fit, staying healthy and having fun to anyone that’s interested.

My ultimate goal is to enjoy life as much as possible for as long as possible and help others do the same.

You have subscribed to alerts for John van Zyl.

You have been added to John van Zyl's favorite list.

You can also sign-up to receive email notifications whenever John van Zyl releases a new book.