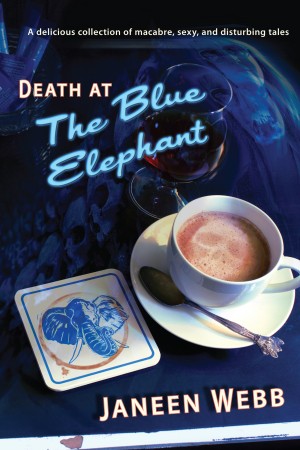 Death at the Blue Elephant

Janeen Webb is a multiple award-winning author, editor, and critic who has written or edited ten books and over a hundred essays and stories. She is a recipient of the World Fantasy Award, the Peter MacNamara SF Achievement Award, the Australian Aurealis Award, and is a three-time winner of the Ditmar Award.

Her award-winning short fiction has appeared in a wide range of magazines and anthologies, as well as a number of Best of the Year collections. Her longer fiction includes a series of novels for young adult readers, The Sinbad Chronicles, (HarperCollins, Australia).

She is also co-editor, with Jack Dann, of the influential Australian anthology Dreaming Down-Under.

Janeen has also co-authored several non-fiction works with Andrew Enstice. These include Aliens and Savages; The Fantastic Self; and an annotated new edition of Mackay’s 1895 scientific romance, The Yellow Wave.

Janeen is internationally recognised for her critical work in speculative fiction. Her criticism has appeared in most of major journals and standard reference works, as well as in several collections of scholarly articles published in Australia, the USA, and Europe. She was co-editor of Australian Science Fiction Review, and reviews editor for Eidolon. She holds a PhD in literature from the University of Newcastle.

Janeen divides her time between Melbourne and a small farm overlooking the sea near Wilson’s Promontory, Australia.

You have subscribed to alerts for Janeen Webb.

You have been added to Janeen Webb's favorite list.

You can also sign-up to receive email notifications whenever Janeen Webb releases a new book.