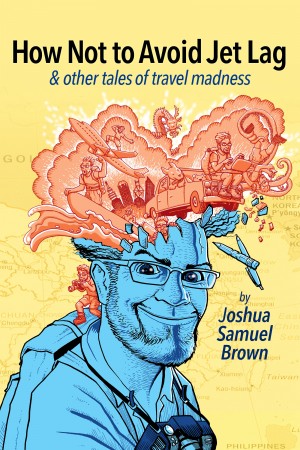 How Not To Avoid Jet Lag & Other Tales Of Travel Madness

By Joshua Samuel Brown
A collection of creative nonfiction, journalism and hallucinatory dreamscapes from China, Belize, Taiwan, Singapore, and other exotic locales. Author and veteran Lonely Planet guidebook writer Joshua Samuel Brown guarantees that each of the nineteen tales in HNTAJL&ototm are "100% free of useful travel advice." Illustrations by David Lee Ingersoll. More
What's the road-toasted travel writer to do after leaving the road behind?

Why not put together a series of insights and observations from Belize to Beijing, have each illustrated lovingly with a one-panel cartoon and create a collection of short stories with a memorable yet slightly unwieldy title?

How Not to Avoid Jet Lag & other tales of travel madness by Lonely Planet Author Joshua Samuel Brown consists of nineteen stories ranging from new journalism and creative non-fiction to surreal dreamscape and exotic hallucination, including "My Parents Are Little People," a story of the bizarre lengths a travel writer will go in pursuit of a hotel review, "Supper in Uyghurville," a gritty tale of menace, drugs and journalism from Beijing's darkest hutong, and "The Milky Teat of Serendipity," a hallucinatory flight of fancy featuring a Singaporean Prime Minister, a Taiwanese president, and a wandering goat-milk salesgirl.

You have subscribed to alerts for Joshua Samuel Brown.

You have been added to Joshua Samuel Brown's favorite list.

You can also sign-up to receive email notifications whenever Joshua Samuel Brown releases a new book.