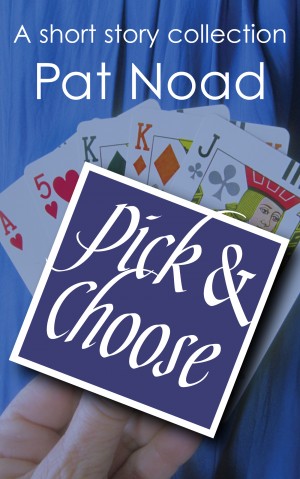 By Pat Noad
These twenty two pieces cover a variety of genres – stories, fictionalised history, reflections on travel and our changing world, and some chance conversations. Some pieces flirt with the supernatural; some concern women’s lives; some touch on happiness; some give readers a glimpse of how authors find their plots. A collection for picking and choosing … More
This anthology has been amassed over a decade. It’s designed for the ‘dipper’, for the reader who likes, in fact, to ‘pick and choose’.

The twenty two pieces in this collection cover a variety of genres: short stories; short pieces of fictionalised history; some reflections on travel and our changing world; and some conversations, all of which could one day find themselves at the core of a novel – these give the reader a glimpse of how and where authors find their plots. Writers are thieves: we’re always on the lookout for nuggets of character and plot to seize, mull over, disguise and, eventually, recycle in our next opus. Beware the casual conversation!

Several themes have emerged from this collection. Happiness is one – are we all responsible for ourselves, for making choices that lead to our personal happiness, however we might define that? The changing lives of women, and the options available to them, is another theme. Then there’s the world beyond the world we know – can there be other dimensions that we don’t yet comprehend?

Some of these stories have been published elsewhere. Some have won awards in competitions, while others have not. Now that the author has judged many writing competitions, she has a much better appreciation that not finding your story in the top three or four should definitely not be a crushing blow! Nevertheless, writing competitions are an excellent way for aspiring writers to develop goals, work to deadlines, pump up the motivation, and polish, polish, polish. Excellence is rarely in the writing – it’s almost always in the rewriting, and the re-rewriting - and beyond.

The author hopes that this anthology includes something for everyone.

Pat Noad is an Australian author who divides her time between big city life in Brisbane and getting sand between her toes on the nearby Sunshine Coast, where a lot of her writing happens.

Pat’s work as a consultant has taken her to all sorts of nooks and crannies of her vast and varied home state of Queensland. She finds herself intrigued by the old stories passing down the generations in this young country, a country which has matured into a sophisticated society so quickly since the First Fleet unloaded its convict passengers just over two hundred years ago – a country which generally looks to the future rather than back over its shoulder.

Her stories often find the blazing Australian sun casting dark shadows from the past across the present, and long-dead skeletons rattling in family cupboards.

Pat’s mystery writing sits at the lighter end of the crime fiction spectrum. She also enjoys writing about the ever-changing Australian society in which she lives, and reflecting on the changing nature of our world. She's written a series of five Annie Bryce mysteries along with two anthologies of short stories and essays. Her latest novel 'On the Edge' is her first venture away from crime fiction in novel form.

You have subscribed to alerts for Pat Noad.

You have been added to Pat Noad's favorite list.

You can also sign-up to receive email notifications whenever Pat Noad releases a new book.