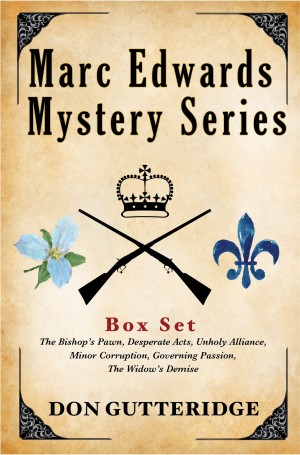 By Don Gutteridge
Rated 4.00/5 based on 1 review
In the 1830's, British North America throbbed with rebellion. Factions in the Canadas wanted democratic reforms from British overlords. Bands of American gun runners south of the border wanted to annex the territory. In Upper and Lower Canada, English and French settles were at odds. Enter dashing Marc Edwards, soldier, detective, and lawyer working to restore justice in the wild zone. More
The 1830s in Canada are the years of unrest known as The Rebellions. Upper Canada and Lower Canada (modern-day Ontario and Quebec) are at odds, and the country is divided. Marc Edwards, Lieutenant-turned-Barrister, and his former police colleague, Constable Horatio Cobb, band together to solve crimes in Toronto.

Don Gutteridge’s Marc Edwards Mystery Series is set against the backdrop of rising political tensions between Upper and Lower Canada as the fledgling country tries to secure independence from British control, establish Canadian parliament, and install a responsible government.

The Bishop’s Pawn
A fiery sermon from Bishop John Strachan incites a grisly murder. Marc investigates and is shocked by the depravity he uncovers.

Desperate Acts
In Toronto’s rough days of 1839, a blackmailer targets several elite citizens who harbor dark secrets. When the extortionist is found dead, Marc defends an acquaintance that is wrongfully accused.

Unholy Alliance
A locked mansion murder mystery set near Toronto in 1839. Marc and Cobb have three days to solve the murder, or the fate of the responsible government negotiations are in jeopardy.

Minor Corruption
In Toronto 1839, an abortion goes tragically wrong, killing a 15-year-old maid in the household of the distinguished Baldwin family. Enveloped in the scandal is a beloved Baldwin uncle who is accused of raping a minor and causing her death.

Governing Passion
A bordello singer is brutally murdered and left in an alley in 1841 Toronto. The only evidence Cobb has to work with is a glove and a set of footprints. Marc contends with a parallel case in Kingston, and the two must work together to uncover a serial killer.

This set of six books from the author's Marc Edwards Mystery Series could be called history with a side of mystery, or possibly the reverse, but I decided the former is more accurate. The underlying element is Canadian history, specifically the period from 1839 to 1841, during which the foundations of what the author terms "responsible government" were laid. A key element of this was the alliance between the English Reformers of Upper Canada and the French Rouge party of Lower Canada. This is the history. The mystery element is added with fictional events that (if real) would have threatened or foiled the historical process. Several of the recurring characters in these stories are actual historical figures, but Marc Edwards and Constable (eventually Detective Constable) Horatio Cobb are fictitious. Their investigations add a lively and often interesting human element. Cobb in particular is an amusing figure, with his habit of apt malapropisms and determination to uncover the truth by creative means. On the whole, I enjoyed this collection. In addition to the entertaining whodunits and courtroom dramas, I was moved to read up on some of the history of Canada that I had forgotten or (I admit) was unaware of. A worthwhile reading experience, altogether. Note that these stories fall in the middle of the series, so references to earlier books may be slightly mystifying. Readers familiar with the geography of Toronto would probably have a better appreciation of some details than those unfamiliar with this city.

You have subscribed to alerts for Don Gutteridge.

You have been added to Don Gutteridge's favorite list.

You can also sign-up to receive email notifications whenever Don Gutteridge releases a new book.