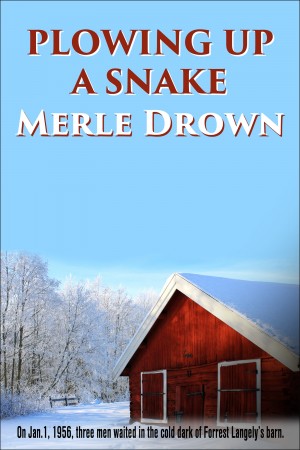 Plowing Up A Snake

By Merle Drown
Plowing Up A Snake, based on a still unsolved murder in the 1950s, gives a striking portrait of a small New Hampshire town’s reaction to the murder of one of its least-liked citizens by some of its most respectable. More
Plowing up a snake means to go looking for trouble, and trouble aplenty comes to picture postcard pretty Enoch, New Hampshire, where citizens believe in taking care of their own, even if that means killing someone who just needed killing. Based on a still unsolved murder in 1950s Northern New England, Plowing Up A Snake unearths the snakes barely buried as passions erupt, truth turns cruel, and death follows death. Only two people, Marjorie, the victim’s widow and Clay, his cousin, want facts revealed, and soon they find themselves entangled in Enoch’s wickedness.

A native of Northern New England, Merle Drown has written stories, essays, plays, reviews, and three novels, Plowing Up A Snake, The Suburbs Of Heaven, and Lighting the World. He edited Meteor in the Madhouse, the posthumous novellas of Leon Forrest.
He took his bachelor’s degree at Macalester College. He received his MFA from Goddard College, where his mentors were Richard Rhodes, Richard Ford, and John Irving--back when we were all young. (He hit the trifecta.) He has received fellowships from the National Endowment for the Arts and the NH Arts Council.
The father of three sons, he mostly lives in Concord, N.H. and Toronto. A hunter-gatherer, he writes, teaches, and freelance edits. He is currently working on a new novel.

You have subscribed to alerts for Merle Drown.

You have been added to Merle Drown's favorite list.

You can also sign-up to receive email notifications whenever Merle Drown releases a new book.