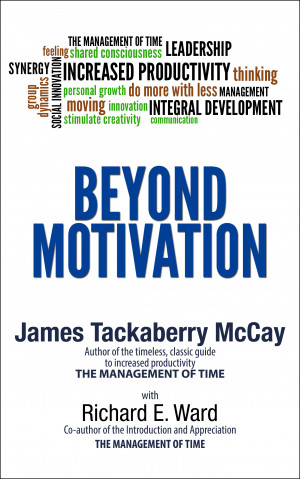 BEYOND MOTIVATION builds on the foundation of McCay's timeless classic of increased personal productivity THE MANAGEMENT OF TIME. The book helps individuals and groups increase their productivity by recognizing that working with others is an exchange of energy. Discover how to recognize the direction and intensity of your own energy and the energy of others so that you can amplify positive outcomes, eliminate waste and store or redirect energy. Get, and give, more for less to each other.

BEYOND MOTIVATION is an incredibly rich work. The material in the book is presented in an easy-to-follow, readable style that makes extensive use of diagrams.

James T. McCay was a business visionary whose work with synergy, integral development and shared consciousness was far ahead of his time. His insights and practical tools developed and refined over the years are still as useful today as they were more than fifty years ago.

BEYOND MOTIVATION by James Tackaberry McCay was originally published in 1970 and builds on the foundation of his classic of personal productivity THE MANAGEMENT OF TIME that was first published in 1959 and then republished by Prentice-Hall, New Jersey in 1992 with a new Introduction and Appreciation co-authored by Richard E. Ward.

BEYOND MOTIVATION is a useful book that can be used in a group setting to stimulate breakthroughs in problem-solving.

Stimulate your thinking before a meeting by flipping through the book to find insights to help see yourself and others in an exchange of energy.

This book does not attempt to persuade by documented argumentation but to present a framework of abstractions which suggest, provoke, and inspire thoughts and feelings in the reader.

There are many uses of BEYOND MOTIVATION in a group or by an individual:

- a background reference tool for conferences and educational classes

- as an outline for structuring organizational settings

The brevity of this book ensures that a reader can be exposed — and grasp the essentials – in fifteen to twenty minutes. Anyone who has tried to communicate complex ideas through comprehensive books knows how useful such brevity can be.

This book is an experiment in communications and the eBook version has the advantages of using hyperlinks so you can easily jump around.

There is no need to read this book sequentially. Start anywhere. Stimulate your mind.

McCay challenged and stretched himself and those around him.

Challenge and stretch yourself and those around you by playing with BEYOND MOTIVATION.

James T. (Tackaberry) McCay – ‘Jim’ to his friends – was a visionary and great business thinker.

McCay was an amazing man with a brilliant mind, gifted at connecting the dots and then communicating his insights as well as helping others to do the same thing for themselves.

James T. McCay was the Chairman of Integron Associates Incorporated of Montreal, co-ordinators of integrated development projects. He acted as counsel on organization growth and executive development to some forty Canadian and United States corporations.

Graduating from the University of British Columbia in 1943 with a degree in Chemical Engineering he went to the Persian Gulf to work on an oil refinery construction project. Returning to Canada he helped to found a company which manufactured and distributed heating equipment nationally. After that time, he practiced as a consultant to management on plant design, work analysis and process controls.

McCay travelled throughout the United States, Canada, Europe, the Middle East and the Orient interviewing several hundred leaders in government, industry, universities as well as researchers in the sciences of man nurturing the growth of the Integron Centre concept and Integral Development.

Guru to the Gurus

McCay’s work as a counsel on organization growth and executive development to leading corporations in Canada and the USA lead many to regard him as a guru to gurus.

The Management of Time

His reputation as a management guru was solidified with the publication in 1959 of The Management of Time by Prentice-Hall, New Jersey. The book is considered to be the classic guide to increased productivity. Prentice-Hall republished the book in 1995 with a new Introduction and Appreciation co-authored by Richard E. Ward.

Beyond Motivation builds on The Management of Time and grows out of McCay’s work as corporate counsel and the development of The Integron Centre – a centre for human development.

You have subscribed to alerts for James T. McCay.

You have been added to James T. McCay's favorite list.

You can also sign-up to receive email notifications whenever James T. McCay releases a new book.