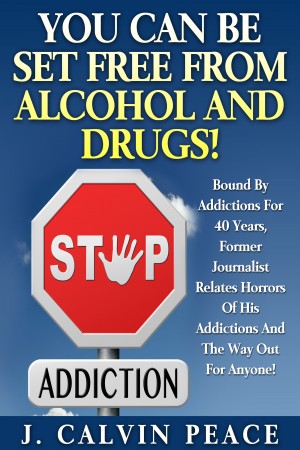 You Can Be Set Free From Alcohol And Drugs!

By J. Calvin Peace III
The author struggled 40 years to overcome alcohol/drug addictions. He completed two rehabilitation programs, but could not stay sober for long periods of time. He lost great jobs and everything he had and was ready to give up, when everything he learned began to make sense. For 25 years he has been sober and is dedicated through this book to show others they can be free, happy and prosperous! More
Bound by addictions to both drugs and alcohol, an addict for 40 years, tells step by step how he became an addict, and how he has been clean and sober for 25 years, and how you or someone you love can have the same victory!

For the first time publicly, this former longtime newspaper reporter, editor and Director of Communications for Tropicana Products, Inc., the world's largest producer of chilled citrus juices and related products, tells how he dropped from owning a home on the water on Longboat Key, Florida, into a $100 rotten travel trailer with his wife, Mary, for five years.

He relates the horrors he bestowed upon himself, his wife and family and how one morning within a few hours within that small trailer, his life was changed forever!

Today at the age of 77, he goes to work every day and visits the local jail twice a week to counsel one on one with inmates in an effort to help them turn their lives around and never face having to go back to jail again.

The author believes that the same secrets he learned that eliminated his addictions, can also change the lifestyles of those caught up in a life of crime and if they apply these secrets, they can finally live a productive life in society and never be a so-called repeat offender again.

Amazingly, his wife of 54 years is still by his side and she and his children have all forgiven him!

During the transformation period of his life, the author witnessed and tells of a number of what he calls “Miracles” that re-positioned him and his family back into Society and set up a future for him and his loved ones.

He has dedicated the rest of his life to helping and encouraging others who are suffering not only from addictions, but from any other pitfalls and traps that life can dish out to destroy lives.

Born in Greenville, S.C. on Nov. 23, 1937, the Author, known as "Calvin" to his family and friends, was raised by his paternal grandparents. At the age of 8 he started working delivering the local newspaper and later became an usher in the local theater. In 1956 he graduated from Greenville High School and then served 6 months active duty with the U.S. Army. He competed his 71/2 more years of military service in the Army Reserve. To pay his way through four years at the local Furman University, Calvin started as a copy boy at the Greenville News and six months later was made reporter. He met Mary Russell at the newspaper and they have now been married 54 years and have two children, Brian and Sissy; eight grandchildren; one great-granddaughter and one dog, Jabez. The Peaces moved to Lynchburg, Va., where Calvin was named Copy Editor of the local paper. He became close friends with the late Dr. Jerry Falwell and attended church there. From Lynchburg the Peaces moved back to Anderson, S.C. and Calvin also served as News Editor and Political Reporter there. He was later named Managing Editor of The Bradenton (Florida) Herald and then became Director of Communications for Tropicana Products, Inc. Plagued with periodic bouts of active alcoholism, Calvin went through a rehab program at Dunklin Memorial Camp near Indiantown, Fl. and although his position was held open for him at Tropicana, he remained on the staff at Dunklin, where he counseled and taught for nearly five years. After leaving Dunklin, Calvin became a sales manager for Barrie Reed Buick/Nissan and later opened A Better Way In Christ Ministries for homeless men. He was a co-founder of Mustard Seed Ministries for families and he and his wife and son, started a furniture business now in its 33rd year of operation. Calvin still works daily with his son and family and counsels at the local jail with inmates twice a week. He has been sober for 25 years and is also an associate pastor at New Hope International Church, Inc. in Port St. Lucie, Florida.

You have subscribed to alerts for J. Calvin Peace III.

Would you like to favorite J. Calvin Peace III?

You have been added to J. Calvin Peace III's favorite list.