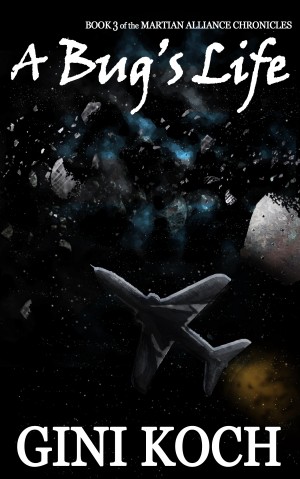 A Bug's Life - Book Three of the Martian Alliance Chronicles

By Gini Koch
Is the cost of a few innocent lives worth risking everything? More
When the crew of the Hummingbird discovers a Pilla Colony recently destroyed by the Diamante Families, they’re faced with the smart choice of leaving or the dangerous one of searching for survivors – and Roy and DeeDee aren’t in agreement about their course of action. But the real question is – why would anyone be going out of their way to destroy the most helpless, fragile, and noncombative race in the galaxy?

Gini Koch writes the fast, fresh and funny Alien/Katherine “Kitty” Katt series for DAW Books, the Necropolis Enforcement Files series, and the Martian Alliance Chronicles series. Touched by an Alien, Book 1 in the Alien series, was named by Booklist as one of the Top Ten Adult SF/F novels of 2010. Alien in the House, Book 7 in her long-running Alien series, won the RT Book Reviews Reviewer’s Choice Award as the Best Futuristic Romance of 2013.

As G.J. Koch she writes the Alexander Outland series and she’s made the most of multiple personality disorder by writing under a variety of other pen names as well, including Anita Ensal, Jemma Chase, A.E. Stanton, and J.C. Koch.

Gini also has stories featured in a variety of anthologies, including the Unidentified Funny Objects 3, Clockwork Universe: Steampunk vs. Aliens, and Two Hundred and Twenty-One Baker Streets anthologies, writing as Anita Ensal, in The Book of Exodi, Love and Rockets, and Boondocks Fantasy anthologies, and, writing as J.C. Koch, in Kaiju Rising: Age of Monsters, The Madness of Cthulhu, Vol. 1, and A Darke Phantastique anthologies, and, coming in 2016, The Mammoth Book of Kaiju. Gini will also be featured in the first book in an X-Files anthology series, X-Files: Trust No One, as well as in the Temporally Out of Order, Timeless Tales, MECH: Age of Steel, Unidentified Funny Objects 4, and Out of Tune 2 anthologies, all coming in 2015.

About the Series: The Martian Alliance Chronicles

The Martian Alliance works in secret. Led by beings with very personal grudges against the Diamante Families, the Alliance strike force scams, cons, steals, and fights its way throughout the planets, gathering credits and allies under cover and in a ship whose real name is only know to its crew.

You have subscribed to alerts for Gini Koch.

You have been added to Gini Koch's favorite list.

You can also sign-up to receive email notifications whenever Gini Koch releases a new book.