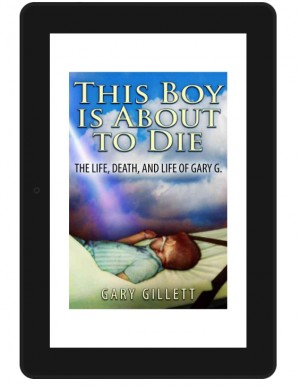 This Boy is About to Die: The Life, Death, and Life of Gary G.

The little 8 year old-boy in the picture, is about to. Join him as he finds out a little more about what his mission is, as a human. Find out how it changes his life, and what could possibly change YOUR life, forever.

Gary weaves a sweet, poignant, and transformative lifetime into a rich tapestry of spirituality, humor, and insight which will leave you crying, laughing, and realizing yourself as a piece of the bigger picture encompassing all of humanity.Imagine dying almost as soon as you are born...and remembering what you saw on "the other side" for the rest of your life. Now, imagine that happening 3 MORE TIMES in your lifetime...and being sent back to Earth to teach what you experienced, each time!

This is exactly what happened to Gary Gillett, and with a newly-awakening world more concerned with spirituality and self-realization than materialism, he's finally decided that it's time to share his mission with those with 'eyes to see' and 'ears to hear' the messages imparted to him.

More than 25 years in the making, "This Boy is About to Die: The Life, Death and Life of Gary G" is the blending and harmonizing of spirituality and humor which has permeated Gary's life, and his daily affirmation to be 'where he is needed' for his fellow humans on their OWN journey, adding pieces to the puzzle we each contain, while gathering pieces for his own growth as he justifies his return from so many near-death experiences.

This book entails with love, humor, clarity, and vivid imagery his near-death experiences, his trials and tribulations...and a vision for the future of humanity.

Gary’s written 5 books on metaphysics, two on poetry, various scripts for animation and science fiction, and just finished his first screenplay which is under consideration for a movie deal, which he is also converting to a 6-part e-Book saga.

He is also a teacher, director, producer, and award-winning multi-media voice actor with projects in 22 countries and several languages.

Gary guested on such shows as Late Night in the Midlands, The Other Side of Midnight, and The X-Zone, to name a few, and is now developing his own radio metaphysics show.

To sum up, a quote from a voice director:  “Gary is a rare individual who can go from a spiritual, soft-spoken man to a manic chameleon with hundreds of crazy characters in a heartbeat.”  He currently resides in Maui, writing, teaching, playing, and continuing to explore a “Life without Limits”.

You have subscribed to alerts for Gary Gillett.

You have been added to Gary Gillett's favorite list.

You can also sign-up to receive email notifications whenever Gary Gillett releases a new book.