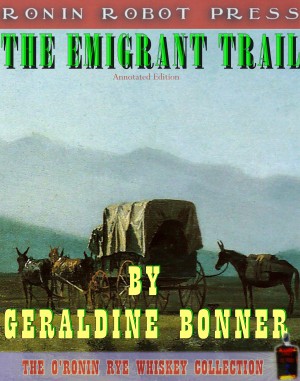 As is true for many early women writers, almost nothing has been written about Geraldine Bonner’s life though she wrote mysteries, westerns, and “working-girl” novels. The meager one-sentence descriptions of her life conflict as to basics such as place of birth and family situation. Even the noted editor of the Norton Anthology, Nina Baym, in her book Women Writers of the American West, 1833-1927 cautiously misses the mark—she states that Bonner was “said to have been born in a Colorado mining town.” This mistake echoes others made about Bonner. The pity of the lack of information is that she appears to come from interesting people and have had an eventful life, though never married (oh, my).
The only definitive information found online is from an unlikely source: a genealogy about the Sewell family, of which she is a descendent. http://www.sewellgenealogy.com/p46.htm The genealogy quotes two New York Times articles that are illuminating: one written upon the death of John Bonner, and one written when Geraldine died. The Times reported on Bonner’s death at 61 (New York Times, February 1, 1922) and describes the fact of the family move to Colorado when she was 10, and later a move to San Francisco.
Born on Staten Island in 1870, the daughter of the late John and Mary Bonner, of old Moravian stock, she was taken West across the country by her parents when she was a girl of 10. For two years she lived in mining camps in Colorado, where her father was a prospector, and received her early education at his knee.
In 1883 the family moved on to San Francisco, where Mr. Bonner became the editor of the San Francisco Argonaut. Miss Bonner herself began writing for the paper when she was 17 and for four years served as dramatic critic and later foreign correspondent. In 1900 she published her first volume of fiction, "Hard Pan," the locale of which was the boisterous mining camps of her childhood days.
Left out of her obituary are the events behind the move which are the stuff of novels. Again according to a New York Times article, John Bonner was a Wall Street stock broker who seems to have been the Bernie Madoff of his day:
A sensation was caused in Wall Street Dec. 31. 1877, by the announcement from the rostrum of the Stock Exchange that the brokerage firm of John Bonner & Co. had failed, and the subsequent information that there was a deficiency of $400,000, and that Bonner had absconded. On the same day the Bankers and Brokers Association, at 16 Broad Street, of which John Bonner was the President and largest stockholder, suspended. Bonner’s financial dealings [which] had been so extensive that his collapse caused a great deal of anxiety, and eventually much loss to various persons. As the head of two important financial concerns in Wall Street, he controlled enormous sums of money, and at times was a very heavy lender. Jay Gould had had large transactions with the firm of John Bonner & Co., and was generally regarded in Wall Street as being the heaviest loser by the failure. Charles J. Osborn & Co. and William Belden & Co. were Jay Gould's brokers, and they had made large loans with John Bonner & Co. on railroad securities. Immediately after Bonner’s failure became known Osborn’s counsel secured a writ of attachment in a suit for $2,000, and property in the hands of Russell Sage and others was attached. Bonner, so far as could be discovered, left no assets behind him. He borrowed $25,000 in cash on the day before he disappeared. His wife and four children were left at his residence, on Tod[d] Hill, S.I., [Staten Island] where the family had lived for thirteen years.
The New York Times, 7 May 1899, written upon the occasion of John Bonner’s death.
According to these accounts, it was at that point that John Bonner ended up doing some sort of work in the Colorado mining camps and sent for his wife and daughter. After two years, he became a newspaperman for The Argonaut in San Francisco. At 17, Geraldine went to work there, and got her start as a prolific novelist and playwright.
Surely, such a rich history deserves a biography (or perhaps a play in three acts)?
Barbara Flanagan (August 2015)

You have subscribed to alerts for Geraldine Bonner.

You have been added to Geraldine Bonner's favorite list.

You can also sign-up to receive email notifications whenever Geraldine Bonner releases a new book.