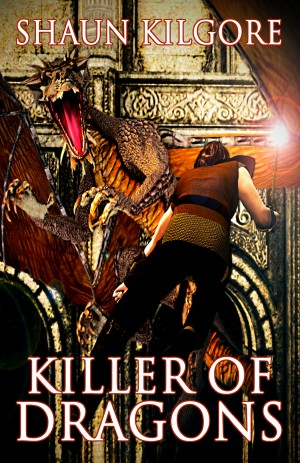 Coming to believe that his strange encounter on the beach was the cause, Ayron leaves to find the silver rod. He meets a nobleman named Tyrus Baranathes who tells him that he has released a creature of legend, the Drakanspawn or dragon, from its long slumber. Only Aryon can defeat the beast. To do that, he must become a Killer of Dragons.
Available ebook formats: epub mobi
First 20% Sample: epub mobi (Kindle)
Price: $4.99 USD
Buy Add to Library Give as a Gift
How gifting works
Create Widget
Tags: fantasy magic battle dragon hero slayer
About Shaun Kilgore

SHAUN KILGORE is the author of various works of fantasy, science fiction, and a number of nonfiction works. His books appear in both print and ebook editions. He has also published numerous short stories and collections. Shaun lives in eastern Illinois. Visit www.shaunkilgore.com for more information.

Reviews of Killer of Dragons by Shaun Kilgore

You have subscribed to alerts for Shaun Kilgore.

You have been added to Shaun Kilgore's favorite list.

You can also sign-up to receive email notifications whenever Shaun Kilgore releases a new book.