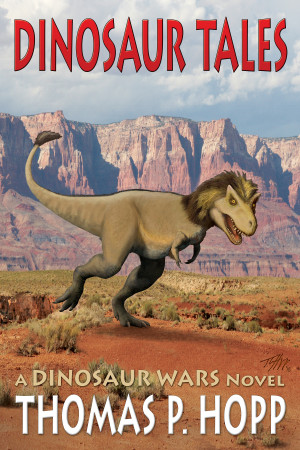 By Thomas P Hopp
THE NEW WILD WEST—WHERE DINOSAURS LIVE AGAIN! Ever had one of those days when you had no other option but to bullfight a charging Triceratops? Or dodge an angry Pachyrhinosaurus? Or fly on a giant Quetzalcoatlus? Then you know how Kit Daniels and Chase Armstrong feel. Action, adventure, and even a little romance are the order of the day in a world gone mad with dinosaurs! More
Kit Daniels and Chase Armstrong, the young heroes of the Dinosaur Wars series, confront challenges in a near-future science fiction tale in which dinosaurs roam the earth again! This dynamic pair are strong male and strong female lead characters, capable of handling frequent dinosaur attacks and the demands of a budding romance as well. When huge long-necked Alamosaurs run amok in cities, Kit and her handsome ranger boyfriend are called upon to head them off at the pass. When surfers vanish on the Mexican coast, Chase and comical old Professor Ogilvey step in to save the day. When the great dinosaur herds start to migrate, the heroes put on their cowboy hats and become dinosaur wranglers! With so much going on, it’s a wonder Kit and Chase can find time for each other at all. An exciting adventure for all ages and both genders.
Available ebook formats: epub mobi pdf lrf pdb txt html
First 20% Sample: epub mobi (Kindle) lrf more Online Reader
pdb
Price: $3.99 USD
Buy Add to Library Give as a Gift
How gifting works
Create Widget
Tags: strong female lead science fiction dinosaur attacks dinosaur novels dinosaur science fiction jurassic park book near future science fiction adventure prehistoric time travel romance
About Thomas P Hopp