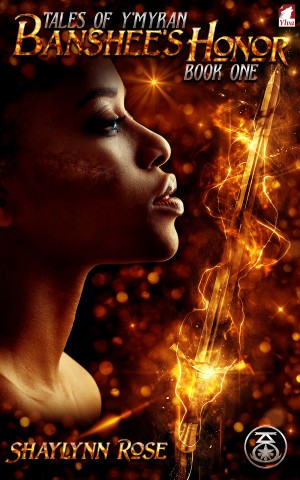 By Shaylynn Rose
Warleader—in Y'Dan, this is a title of pride, of honor, and of joy. Oathbreaker—a word branded only on those whose crimes are so heinous, all must know of their crime. Both of these names have been given to Azhani Rhu'len. Only one of them is right. More
Warleader. This is what the people of Y'Dan used to call the proud warrior Azhani Rhu'len.
Banshee. Oath breaker. Murderer. These are words that slip off their tongues now.
Azhani Rhu'len, once one of the greatest of Y'Dan's warriors, is now just a common criminal, escaping the justice of the kingdom she swore to serve.

Kyrian Stardancer. Goddess' Own. A healer and priestess, she is inviolate until one day, when her world is turned upside down and tossed over the back of a horse—literally.
Torn from all she knows, Kyrian finds her fate now rests squarely on the shoulders of the oath breaker, Azhani Rhu'len.
When signs of ancient evil appear, Azhani and Kyrian must choose whether to ignore the warnings or stand and face the terrifying menace.

Shaylynn Rose has never wanted to do anything other than create. From an early age, she was writing stories and poems, painting pictures, making jewelry, and exercising her imagination in every way she could. A fascination with mythology grew into a full-on love for fantasy and science fiction, and through this, she discovered the world of role-playing games, where she developed and honed her storytelling chops. Eventually these loves merged when she began writing the first of many stories, most of which aren’t fit to print but nonetheless allowed her to stretch her muscles little by little.

The late nineties brought the advent of television shows such as Xena: Warrior Princess and Buffy the Vampire Slayer, and through these mediums, she discovered the world of fan fiction, beta readers, and feedback. This was, for her, a perfect storm for nurturing her creativity. Through the Xena fandom, she met Ciegra, who pushed and shoved and generally encouraged her to stretch beyond the comfort zone of fan fiction and back to the place where stories first began—the world of original tales.

With Ciegra (and, once the secret was out, her family and numerous other friends) constantly cheering her on, Shaylynn found the courage to write and eventually publish her first novel, Banshee’s Honor. Sadly, Ciegra passed away in 2011, but her spirit lives on, always pushing Shaylynn to keep writing, to share the characters that live inside her head, and to stay away from writing laundry lists instead of stories.

About the Series: The Tales of Y’Myran

Books in this series:

Also in Series: The Tales of Y’Myran

You have subscribed to alerts for Shaylynn Rose.

You have been added to Shaylynn Rose's favorite list.

You can also sign-up to receive email notifications whenever Shaylynn Rose releases a new book.