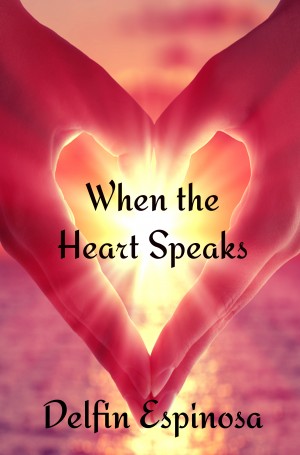 When the Heart Speaks

By Delfin Espinosa
This is a book intended to be inspirational to everyone.
It is an assortment of poems, prayers, and words of encouragement. My hope is that this collection of writings will touch every heart in one way or another and bring the heart and soul the words that are needed at the right moment.

First 20% Sample: epub mobi (Kindle) lrf more Online Reader
pdb
Price: $3.75
Free! USD
Buy with coupon Use the code AG100 at checkout to get this book for free during our site-wide promotion!
(Offer good through April 20, 2020 )
Have a better coupon?
Add to cart, then apply your coupon
Add to Library Give as a Gift
How gifting works
Create Widget
Tags: romance love friendship god poetry heart faith caring inspirtational
About Delfin Espinosa

Delfin Espinosa has been writing poetry from an early age. He grew up in a small town in West Texas. His father worked on a ranch and that is where Delfin spent his high school summers working with his dad and older brother. Delfin has always loved the outdoors and that is where most of his inspiration has come from. Delfin grew up listening to country music. They listened to the country music while driving in the ranch truck. Delfin grew up as a real cowboy working with cattle, building fences that stretched for miles. He loved the freedom of being in the outdoors. Delfin has always wanted to help people and this is what led him to go to nursing school. He graduated in the fall of 1992. He passed his boards in the Spring of 1993. He went on to work as a nurse for the next 20 years. He met many interesting people along the way as he worked in many areas in the medical field.

Delfin, while working in a small nursing home in West Texas in 2001, met Allison Bruning who was working
there as the activities director. They got together and went on to marry later that same year. They moved around the West Texas area as the jobs required. They eventually moved to Kentucky in the summer of 2008. Allison is from Ohio and felt a need to move closer to home. Delfin loved living in Kentucky due to the scenery. There was green grass everywhere unlike the desert of West Texas. There were plenty of lakes and rivers which made him feel right at home living in nature.

It was in Kentucky that Allison rediscovered her love of writing and Delfin began working on a book to include his many experiences as a nurse. Allison has become a bestselling author. She writes mostly historical fiction.
Delfin continues to work on several books of his own.

You have subscribed to alerts for Delfin Espinosa.

You have been added to Delfin Espinosa's favorite list.

You can also sign-up to receive email notifications whenever Delfin Espinosa releases a new book.